Information: This page features an Epic NPC, they are not playable nor can they be unlocked. More info can be found here.
Language:
Wind Shooter 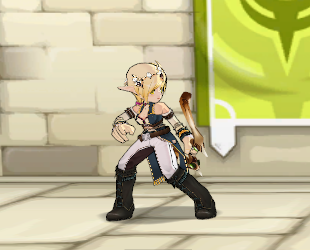 Believe in the strength of the grand bow and try to follow Amelia's tactics. Friendly Elves are known treasure hunters that practice the mechanisms of archery. She can subdue an enemy from a long distance without getting hurt. Also, Amelia's arrows can be used to attack targets in a wide range.

Amelia has access to all of the Grand Archer combos.

Amelia will mainly focus on maintaining distance and winning a 1vs1 match through the time-limit. Due to the combination of her Quick Recovery and extremely high speed, she is able to jump out of your combos if you're too slow. The only way you can stop her from escaping mid-combo is to use a fast, high-combo, non-launch skill.