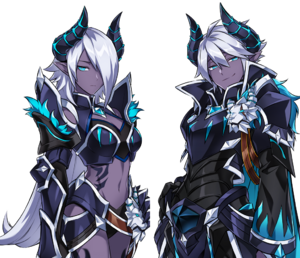 The demon twins that serve as commanders of the Dark-Eyed Army directly under Scar.

The two demons, were first seen in Phantasmal Geyser, they were the ones responsible for tainting the spring water with the Demon's charm potion. However to get Sirena into an even deeper trance, they corrupted her themselves causing her to go mad. In found much amusement out of the act while Jin pressed In to keep his mind on track. The two then fled to the Fire Temple.

The two demons patrolled the Collapsing Temple of Fire, fighting the El Search Party separately, the two guarded the inner sanctum of the temple. When defeated the two demons retreated deeper into the chasm.

As the Demon God Sult was soon to be revived, the two demons were Scar's final line of defense in the Grand Cavern: Chasm of the Divided Land. There they fought together, side by side. Though defeated, the two demons fled the scene while the El Search Party stormed to the final battle with Scar.

Even after Scar was defeated and the Demon God Sult sealed away by the El Lady. Jin and In were not finished just yet. The two sensed that a remnant of Sult still remained inside the Grand Cavern. The two demons tracked down the dark energy to the Grand Cavern: The Source of Demonic Energy where they lured it to the altar, there they tried to give the dark energy a physical form. They were able to do so, however the beast created was not able to be controlled. Running berserk, Jin and In fled the scene leaving the El Search Party to deal with the Mutated Form of Demonic Energy.