Language:
Master of the Crimson Eye 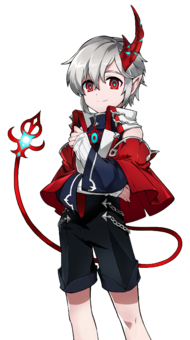 One of the Demon Realm's four most powerful lords and leader of the Red-Demon Army and a shapeshifter. Known among the other Demon Lords for his intelligence and wit as opposed to raw strength. He was betrayed and sealed in the Demon World subspace, but managed to escape to Elrios but had his powers scattered in the process. No longer picking sides, Stirbargen only lives for his own enjoyment. He currently primarily takes on the form of a child.

Under the Demon King's rule, Stirbargen was one of the four demon rulers recruited in order to unify the entire demon world.

The Bet with the Crimson Eye[edit]

Sometime in the distant past, Stirbargen made a bet with somebody and in the process wagered one of his crimson eyes. Unfortunately for the demon lord he lost that bet and had to forfeit one his his eyes. The circumstances are unclear when and who he gave his eye to but eventually it made it into the hands of the Rosso clan and after the El Explosion occurred, the Fire Master Rosso ended up in the Demon Realm with the Crimson Eye.

After the Demon King fell from his throne, a power vacuum soon consumed the demon world. A large amount of infighting began throughout the realms between and within the jurisdiction of the Four Demon Lords. Stirbargen was eventually betrayed by Ran. He was sealed inside the Demon World's subspace. He would eventually be able to escape his imprisonment and found his way to Elrios, but in the process the seal that bound his powers was scatted across Elrios, rending his powers limited. When escaping to Elrios, Tir decided to take on the form of a child.

When Ran and his demon forces began their invasion of the Xin Kingdom, Stirbargen was in the area. Stirbargen saw Ran while he was Fahrmann, but the two had already parted their ways.

Soon after, going through the forest, he ran into Ara. She tended to the boy's injuries and told him to seek a nearby village in order to seek proper care. Stepping back, Ara talks out loud about her concerns over Ran. Stirbargen overhears her and mentions that the person who had given chase to him called himself Ran. Ara jumped at the boy to tell her where Ran was, but she soon realized the absurdity of her actions, asking a boy to go back to the person he had fled from. Stirbargen told Ara a shortened name, "Tir". He didn't mind as he told Ara he was meaning to head back to try and get back something important he had left behind.

Soon, Eun feels a monster close by and they soon spot a dragon just beyond the bushes. Ara tells Stirbargen to stay back as she planned to take on the monster, much to Eun's uncertainty due to Ara low mana.

After Ara was able to slay the beast, Stirbargen was impressed that she was able to defeat the guardian that was transported to guard the seal. With Ara unconscious from the battle, Stirbargen walks up and absorbs a fragment of his powers back. Looking back at Ara, he realized that Ran would probably be back to get rid of her as a potential threat, Stirbargen then believes that if he allowed her to grow, she might be an invaluable asset for him in the future. Soon he notices the strange hairpin Ara had in her bag, before he could do anything, Ara awakens possessed by Eun.

Eun is quick to realize that the boy is not human, sensing his demonic energy. Stirbargen tell Eun that the girl had help him removed the seal to his power, Eun is angered that the boy deceived Ara. Stirbargen corrects her that he wasn't completely lying, actually having seen Ran, going so far to say he might plan to track Ran down now that he has some of his power back. Eun is shocked to hear that the boy would simply just walk away after they had helped him. Stirbargen simply rebuts that he never said he would help them in the first place, however he did say he may return the favor one day.

Eun lets the boy walk away, but before Stirbargen could leave, he mentions a demon he had once known, one who had once boasted about sealing a Holy Beast in a hairpin. Eun quickly jumps to threaten the boy to tell her who that demon was. Stirbargen was undeterred by Eun's threats, knowing his powers already far exceeded hers. Eun attempted to attack but was quickly halted by a promise she had made to Ara. He then makes a bet with Eun, that he would tell them all they need to know about Ran and the demon who sealed Eun the next time they meet.

Having made the deal, Stirbargen seeks out Ran. He remarks that Ran appears to be proud of his betrayal but soon states he no longer cares about his throne. He soon informs ran that Ara is a very important person to Aren and that she is soon to seek him. However, Stirbargen pins Ran with his demon powers, threatening his life, refuses to let him harm Ara and ruin his fun, intending to make a new bet the day they all meet once again. A bet that will settle the girl and Ran's punishment. He then lets Ran go and they part ways for the time.

Sometime after his encounter with Ara, Stirbargen was able to make his way back to the Demon Realm, luckily he knew the exact coordinate of the Demon Realm and has an exponentially easier time crossing over as opposed to the El Search Party in the future.

While investigating the area of Varnimyr that had suddenly begun to deteriorate due Rosso reacting to the El's restoration, he took on the form of a small spirit. When the El Search Party arrived, he feigned as a defenseless Tiny Spirit and they rescued him. To repay the group, he offers to guide them to Nephilim Lord.

After Nephilim Lord came to his senses and set the El Search Party on a mission to deal with the mysterious force emanating from the tower, the Tiny Spirit volunteers to help guide the group to the tower.

After directing the group towards the fields outside the Crimson Tower, he let the El Search Party proceed onwards while he waited behind.

At this point, Stirbargen merely watched in entertainment as he was able to see the vast majority of the events between the El Search Party and Rosso due to Rosso currently being in possession of his right eye.

Chapter 36: The Master of the Crimson Eye[edit]

While in the mines, the El Search Party find that the Tiny Spirit was under attack by the Dark Agate. Eun fall greatly suspicious of the spirit, as does Ciel. With no real reason to continue his ruse, the Tiny Spirit transforms, revealing that he was the Red-Demon King Stirbargen the whole time. After revealing himself, he expresses excitement and gratitude towards the El Search Party for how entertaining their battle with Rosso was. He tells the group that he wasn't ordered by Nephilim Lord to take them here, it was a lie. Though, he did want to see if they would get a clue if he took them to the mystic stone mines.

Looking over at Luciela, he expresses condescending interest that she had combined her soul with Ciel. She takes offense to his words and asks him to stop trying to be so friendly, saying that his actions were revolting. Stirbargen wonders if she were still bitter towards him for the time he beat her in a battle, Lu expressing that he only won because of a cheap shot, but Stirbargen retorting that battles are won with not only raw strength, but also wit. Elesis wonders how Lu knows him, Lu then revealing that he is indeed on of the four Demon Lords. Aisha then was confused by both of them looking like children, Stirbargen expressing that he is a shapeshifter who can assume any form he pleases, so he just desired to be in his current form.

Eun, take over Ara's body then confronts the Demon Lord, asking why he would seek out her despite them playing a game of hide-and-seek. Without anybody noticing, he manages to get behind everybody, telling them he couldn't do anything while in his spirit form, and tells Eun that he'd like to end their bet with a tie. Elsword asks what exactly they're talking about. Stirbargen notes that Eun never told anybody about their game. Provoking Eun more, she threatens him, but he merely laughs and enjoys the frustration people feel when he reveals himself to them. He then says he's probably too weak to take on the entire group so wants to end his game with a tie and wants to give them some information. Add expresses clear skepticism to anything the boy has to say. Stirbargen seems relieved they aren't complete fools but tells them that he no longer cares for his throne, the war, or even if the world is coming to its end, he merely wants to enjoy life to its fullest. He says that his offer will benefit them as well as forward his own entertaining goals.

He decides to start with a story, but before telling it, without anybody noticing, he manages to swipe everybody's weapons. He then tells the group about the Dark El. Telling them that it has been a rumor for so long that its mere existence is a very divisive topic in the Demon Realm. He brings up Barkat as the current leader of the Demon Army, but drops that point just as quickly. Raven asks him if he knows its location. Stirbargen says he doesn't. He tells them that their plan to ally with the spirits was a good one, but it would never work. Stating that the way spirits sense the El would only give them extremely vague hints towards sources of Dark El energy, case in point, the very mines they're in. He then goes on to tell the group that the Crimson Eye that Rosso had was indeed his own eye that he lost in a bet with the El Master a long time ago. Stirbargen was equally surprised to see Rosso in such a situation, saying that he saw the whole thing, but promises that he only a mere observer. However, he does note that Rosso had used up all the energy that was in the eye, saying that once he got it back, practically all of its powers had been used up. He expresses pity towards creatures that no longer find themselves either human nor demon, lonely creatures without sides, provoking Lu and Ciel. He tells them not to think too much into it, but soon suggests another bet with the El Search Party, expressing his love for bargaining.