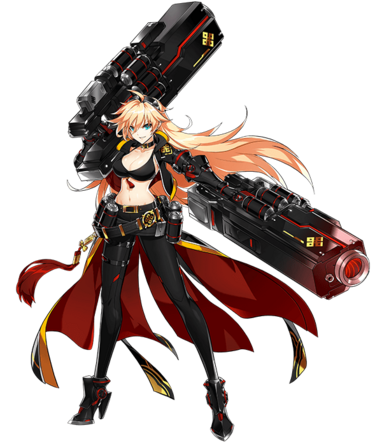 A master of heavy weaponry that utilizes enhanced bullets to maximize destruction.

When her laser-based weapons failed to pierce her enemies' thick armor, Rose starts conceptualizing a new weapon that focuses on physical ammunitions.

Rose researches and creates a railgun and names it 'Supersonic Buster'.

One shot from the railgun will demolish everything in its path.

"You don't stand a chance against my weapons."

A master of heavy weaponry that utilizes enhanced bullets to maximize destruction. Rose completely demolishes everything with one meaningful yet powerful blast.

When her laser-based weapons failed to pierce her enemies thick armor, Rose started conceptualizing a new weapon that focuses on physical ammunition for stronger impact on contact with her enemies.

"I'll put everything into this one shot!"

A new hybrid railgun, "Supersonic Buster", with the ultimate piercing capability is born with the explosiveness of gunpowder and speed of an electric current. When the gun starts firing, the only thing that remains is a pile of wreckage.

will change your job to Tempest Burster.

After unlocking 3rd Job, upon reaching Rigomor, you will be able to unlock the Master Class. To receive the quest, click on the notification located below the map select.
Master Class can also be obtained by using the Cash Shop item: Mark of Awakening (Tempest Burster)