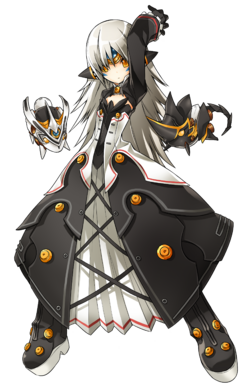 [A Nasod Queen with the battle code named 'Exotic' activated]

In addition to the effects of Code: Recovery, Trick Key uses the Exotic Code to enhance Eve's mobility with additional glides.

Queen of Destruction, who focuses on using attack drones.

To fight against stronger enemies, Eve needed to become stronger.

By unlocking the destructive Code: Exotic, she obtains the ability to summon Nasod weapons.

With Code: Exotic unlocked, she is the new Queen of Destruction.

will change your job to Code: Exotic.

Upon reaching Lv. 35, a Code: Exotic can advance into a Code: Nemesis.