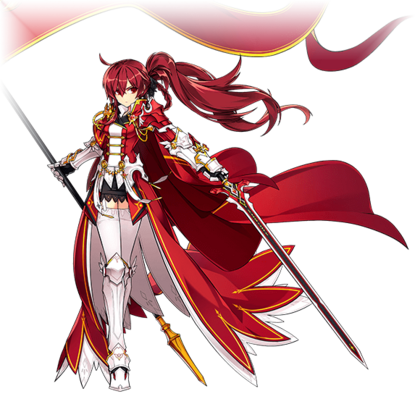 [A noble knight of Velder that leads the people with her charisma.]

A noble knight of Velder that leads the people with her charisma.

As the surrounding expectations towards her kept getting higher, Elesis feels her sword also become heavy with duties and responsibilities.

However, it is this expectation that gives her strength.

Elesis becomes the ultimate symbol of victory, to the point her enemies would lose the will to fight.

There is no such thing as defeat for Elesis of the Red Knights.

As the Sword of Velder Kingdom and the symbol of knighthood, Elesis is a hero of the people and a role-model for all the knights of Velder. As the surrounding expectations towards her kept getting higher, her sword also became heavy with duties and responsibilities.

"I can handle this!"

The expectations from those who believed in Elesis started to weigh down her sword, but Elesis saw this as a source of strength to fight with, rather than a burden. Elesis of the Red Knights becomes the ultimate symbol of victory and just her presence alone makes the enemies tremble in fear.

will change your job to Empire Sword.

.
Protector of the Empire

After unlocking 3rd Job, upon reaching Rigomor, you will be able to unlock the Master Class. To receive the quest, click on the notification located below the map select.
Master Class can also be obtained by using the Cash Shop item: Mark of Awakening (Empire Sword)