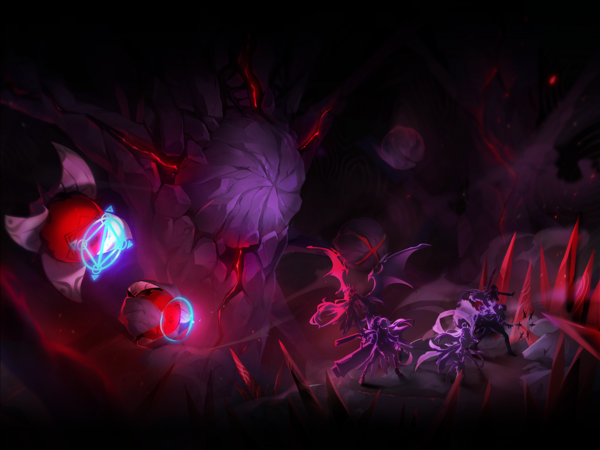 In the deepest pits of darkness, various thorns will pierce out of the ground. Players are tasked with destroying the thorns as fast as possible and cause the 4 Silent Observer flower buds in the back to bloom. Every 30 seconds, blue markings will appear clockwise on the wall around the main flower, that apply the Strange Gaze debuff which decreased Physical/Magical attack for the rest of the dungeon. The intensity of the debuff depends on the amount of markings that have appeared. For marking 1 to 9, the effect changes from 5%, 10%, 14%, 18%, 21%, 24%, 26%, 28% to 30%. The potency of the Debuff is carried over to the next Phases. Grey Thorns can only be harmed using combos and actives while the Red Thorns can only be destroyed with the use of special and hyper active skills. In Normal Mode, should the party fail to clear out enough thorns before the blue markings completely encircle the main flower, it will violently explode with demonic energy, killing everyone in the party regardless of resurrection abilities, and cause the dungeon to fail[1].

The Dark Observer has bloomed revealing the core. Smaller Silent Observer have also awakened. Defeat the main flower. While the small flowers are alive, they will grant the main flower a shield that makes it invincible. Both the main flower and the smaller flowers will target players at random with the blue circle that acts as their pupils, also causing a target to appear on the player targeted, before firing a large laser. The flowers may start glowing red and charge up a large powerful attack. Destroying the small flowers during this period will render the boss temporarily stunned.

The core has detached itself, defeat the core. If the core is able to defeat any player, it will heal a significant amount of its HP. While it's HP is below 60%, it may enter a protective state and target a singular player with a powerful vine attack, the attack must be redirected back at Crimson Eye multiple times in order to stun the boss.