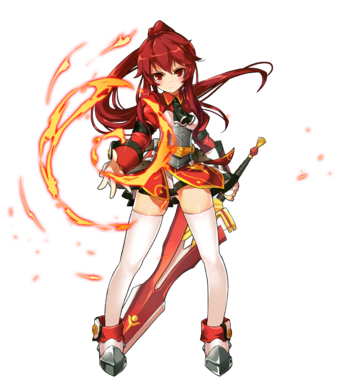 [Captain of the Red Knights who sworn to protect Elrios.]

Elesis possesses the gauge of Chivalry, similar to her younger brother Elsword's "Way of the Sword" gauge. Elesis fuels this gauge best offensively, with both basic attacks and skills. Depending on the types of attacks used to fill the gauge, a corresponding aura will activate once completely filled. Activation of the gauge will give her one of the two auras: Spirit of Annihilation or Aura of Gale. Spirit of Annihilation will make Destruction skills and commands automatically deal Critical damage and ignore Guard while Aura of Gale reduces the MP cost and cooldown time of Gale skills.

Influenced by her father who was a free knight of Velder, Elesis is also an excellent swordsman.

When she and Elsword was suddenly attacked by demons, she foresees danger and joins the Velder Knights and tries to protect the kingdom from the emanant demon invasion.

Finally, she encounters the demon who attacked Feita and Velder again....

Elesis is required to be Lv15 to begin her first class advancement.

Elesis can decide between advancing as a Saber Knight, Pyro Knight, or Dark Knight.

A magical swordsman with enhanced power of fire.

A avenger of blood who pulverize her enemies.

Prior to joining the El search Party
Generic Clear Lines