For one of the Epic NPC of the same name, see Ice Princess Noah. 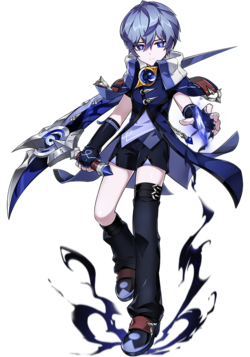 When Noah uses his skills, the shape of the moon changes. Depending on the shape, he gains additional awakening/resurrection effects.

He uses a sickle as his main weapon and uses the power of the moon and darkness that mutated from an experiment.

He lost his brother to Henir's Order and forgot about it, but got his memory back after the El Explosion and was sealed shortly.

After many years have passed, he woke up within the temple affected by the restoration of Elrianode.

Noah is required to be Lv.15 to begin his first class advancement.

At level 15, Noah can decide between advancing as a Second Revenger, Second Selection, or Second Grief.

Use the power of Shadow with Obsidian.
New Moon Awakening is stronger and can deal critical damage to enemies.

A class that utilize cards with the Circulation system and fulfill various roles depending on the activated cards.

A class that uses Relic of Confession and Rest, and moonstones with the power of the moon to protect your allies.

.
The Hour Between Dog and Wolf