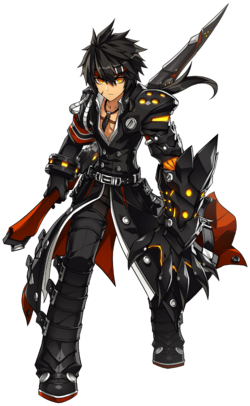 [A mercenary that uses the Nasod Arm as a weapon]

Some of this path commands and skills are affected by Overheat. Overheat allows you to drain a percentage of a command or skill's damage from your HP to provide you with a buff that increases your attack power for a short while.

A warrior that incinerate his enemies with flames from his Nasod Arm.

A strategist who understands that his Nasod Arm is a weapon, and use it to his advantage.

He prefers versatile fighting style that he learned from his mercenary days.

He is capable of blasting fireballs and igniting deadly explosives with his Nasod Arm.

With the Overheat system, he sacrifices his body to push his attack power over the limit.

will change your job to Weapon Taker.

Upon reaching Lv. 35, a Weapon Taker can job advance to a Veteran Commander.