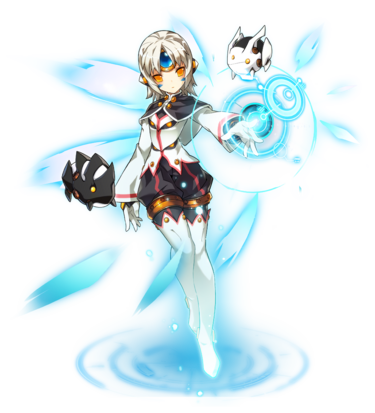 Eve's Core Release System allows you to go into battle with intensified, automatic attack and defense moves. Initialize the system by going into awakening mode, and build up its power while in action. Your enemies wouldn't know what hit them when you bring on the pain!

The Queen of Nasod, with high intelligence and sense of self.

Eve went into hibernation when the power of El suddenly disappeared, but is awakened when El energy seeps in due to the disturbance caused by the El Search Party.

She joins Elsword and his friends to find the El to rebuild the energy core that she found destroyed.

Eve is required to be Lv15 to begin her first class advancement.

Eve can decide between advancing as a Code: Architecture, Code: Exotic, Code: Electra, or Code: Unknown.

A summoner type that calls upon her Nasod guardians to fight alongside her.

With piercing lasers and stronger electron beams, she can annihilate her enemies from afar.

A class that rebuilt the lost Aerial Movement, allowing her to move unlike any other job paths in the battlefield. 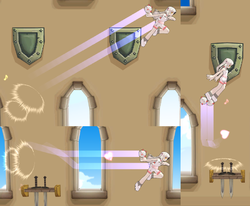 Through the use of this code and with some help from her Nasod drones, Eve is able to double jump and slowly hover down towards the ground, as well as glide around through the air, providing her with excellent forward and upward mobility that exceeds normal jumping and grounded movement.
While in the air, you are able to either double jump once, or perform up to two Air Movements, allowing you to glide upwards once before landing.
The amount of Air Movement you can perform is affected by passives such as Graceful Step (Code: Exotic), Electron Accelerator (Code: Architecture), or Photon Booster (Code: Electra).
As Code: Unknown, neither double jumping or Air Movement is available.

You can activate her Aerial Mobility Code through the following commands:

Prior to joining the El search Party
Generic Clear Lines