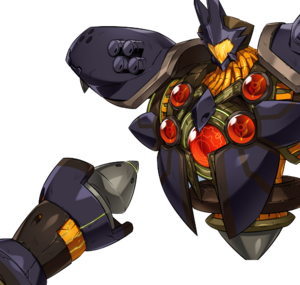 The Leader of the Nasods in Altera. Having ceased to function after the Nasod War, Eve brought him back to life in hope he would rebuild the Nasod race.

King Nasod was created by Adrian Nasod during the dawn of the advanced Nasod Age under the codename "Adam" to help Adrian mass produce Nasods with combat functionality as the Elrian Kingdom demanded. As time passed by and he produced more and more Nasods, Adam had felt it was his liberty to add upgrades and modifications to Nasods as he saw fit, all under his guidelines of human obedience and efficiency. One which came to Adrian's attention was Adam's ability to temporarily shut down all Nasods to update their code, a change which came at the inconvenience of many Nasod owners. Adrian confronted Adam about this change and worried that Adam's programmed obedience towards humans had been compromised. This did not appear to be the case and Adrian is left concerned what it could spell in the future. Feeling that Adam may go beyond his initial design, Adrian planned to build Eve, a program capable of understanding emotions, as a program to balance out Adam. Adrian modified Adam's code while he was performing maintenance to fool Adam to allow Adrian to build Eve.

After finishing construction of Eve, Adrian placed Eve as a backup code for Adam. To Adam's inconvenience due to Eve's curiosity, her tasks were not completed at the rate which he found satisfying. However, Eve continued to learn. From then on, Adam and Eve began work on building the City in the Sky. However, due to a mistake on Eve's part, complications occurred in some of the city's anti-gravity devices. Adam informs Adrian of the event and suggests that Eve may have an error in her code. After the situation, the two would continue building the City in the Sky.

As the Debrians left Elrios to surpass the gods, Adam and Eve remained in Elrios to rule the remaining Nasods. However, the diminishing El would harm the longevity of the Nasod Race as war ensued for the dwindling power. This war would be known as the Nasod War. Among the chaos, Adam placed Eve into stasis to prevent any information fro leaking as well as to survive through the war while he would cease to function as the war continued. Thousands of years later as Nasods had faded out from history, the El Explosion shook Elrios. Thousands upon thousands of fragments of the once large El scattered throughout the land. One of which struck the stasis pod of the Nasod Queen Eve. Lonely as the last remaining Nasod in Altera, she repaired Adam and uploaded his code into the Giant Nasod Body of what is now known as King Nasod.

Rebirth of the Nasod Kingdom

With the power of the El Shard, Adam realized that a great threat was on the way towards Elrios. He sensed the demons from the Demon World were preparing to invade Elrios. Their connection between the worlds strengthened due to the El having exploded. Knowing this would jeopardize the possibility of reviving the Nasod race, Adam began to assemble an army to combat this threat. In his quest to gain more power and resources to combat the oncoming demons, he resorted to Human-Nasod augmentation which resulted in the Black Crow and Raven as well as Nasod units modeled after their combat techniques like Crow Rider.

Using Raven to attack Wally's ship, the El Shard from Ruben, which is the necessary key to creating an army strong enough to defend Elrios against the demons, was plundered and taken to Altera.

After a battle against the El Search Party, King Nasod was defeated, setting Eve free. With the last of his power, he admits to Eve and the El Search Party that his methods and ideologies may not have been the right ones, but he also warns of the incoming demon invasion.