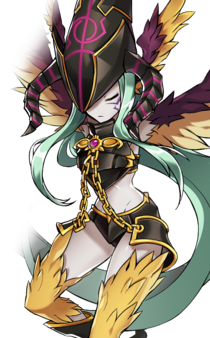 The leader of the harpies which reside on Garpai Rock. An arrogant leader, she thinks highly of her kind and has her prejudices against the Trocks thinking of them as lowly. Originally a very aggressively defensive leader as harpy feather trade ran rampant in Sander's market, after regulations halted harpy feather trade, Kelaino tolerated humans with tense relations. However her animosity towards humans is easily reawakened when harpies began to appear dead and stripped of their fur and feathers.

Before the agreement between humans and Harpies was passed three years ago banning the trade of Harpy feathers in Sander's markets. The Harpies were being brutally hunted for their high value feathers. This naturally enraged, the Harpy leader Kelaino and the other Harpies began to attack other humans and traders in the area. It was not until Emirate agreed to ban the trade of Harpy feathers did the Harpies and human coexist.

However, this coexistence was disrupted when Kelaino discovered a dead Harpy stripped of her feathers. Enraged at the sight, Kelaino lashed out at the humans in Sander. Sensing the darkness that was crawling towards the Wind El, Karis appeared and convinced Kelaino that the darkness was caused by the humans in Sander and the Caluso Tribal Village fighting over the Wind Priestess.

The El Search Party aiming to rescue Anduran went to Garpai Rock, aiming to reason with Kelaino, they send her a Harpy feather hoping she would storm their way. Kelainio did speak with Emirate and Vapor, they tried to explain that they were not the ones who killed and stripped the Harpy of her feather but Kelaino refused to believe their story, enraged she sent her two minions Aello and Okypete to attack the messenger Emirate had sent to the Caluso Tribal Village. When Vapor sought direct audience with Kelaino once more Kelaino explained that a witch, Karis, had told her that the humans were warring against each other over the Priestess, and that their greed was corrupting the Wind El. Vapor and Elsword informed Kelaino about the recent demon invasions and that the witch was most likely the one who corrupted the Wind El. Kelaino felt deep anger in herself that she had been fooled by Karis. Vapor asked where she had taken the Priestess and Kelaino told her that Trocks alongside Karis had taken the Priestess away, to where she did not know.