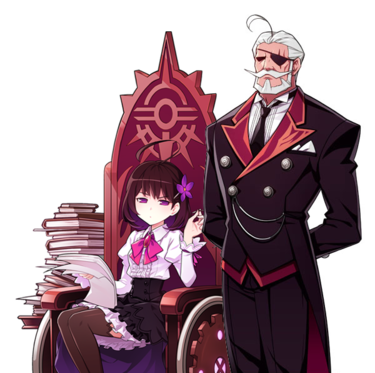 A successor of the family who rules Lanox using the Fire El, 17 year old Edel likes books, but doesn't really like government affairs. When the Fire El burst out of control, she lost her father and hurt her legs. She had been burdened with a lot of stress since. Good thing Sebastian doesn't mind being at her service.

Up until the Fire El went out of control, Edel lived a very normal life being the daughter of Lanox's previous chief. She would bury herself in books as she loved to read through various types of literature. However when the Fire El went out of control, Edel would be greeted with some of the most difficult challenges of her life. In the incident following the Fire El losing control, natural disaster took the life of her father, as well as injuring her legs resulting in her requiring a wheelchair most of the time. The girl, only 17 took on the role of Chief of Lanox after her father's passing. With the situation in Lanox deteriorating, Edel made contact with all the El Priestess to assemble in Lanox.

When the El Search Party made their way to greet the young chief, Edel immediately expressed emotions of dread. Emotions provoked by rumors that horrible things always happen around the El Search Party. Informed that Ignia was headed towards the Ashen Land in search for the other Priestesses, Edel tells the group to go through the Burnt Forest to reach it as well as to investigate the strange occurrences in the forest, as other attempts to investigate the forest have ended in failure due to the rising heat. The group returned and reported the Undying Fire littered throughout the forest, which Edel worries about. Telling the El Search Party to gather samples and relay it to Pesop, the alchemist confirms that the fire in not normal, inextinguishable. After investigating the unusual flames with Pesop, Edel is informed that the Fire El mixed with dark spirits were causing the undying flames. Edel tells the El Search Party the severity of the situation, due to half of Lanox being the Volcanic Grounds, if the Fire El goes completely rouge, the eruption will wipe out all of Lanox. Elsword questions the logic of where the Fire El was placed, soon followed by Edel threatening them to go and investigate it or she will haunt them if things go south.

After the El Search Party was able to get Sdeing back to Lanox as well as cure him of his hypnotic trance. Edel explains that despite that, he body is still in an ill condition which Pesop proposes can be resolved with the help of Sirena's Crystal Ball which possesses the spirits of Phantasmal Geyser. After the incident as the geysers was resolved, Edel suspected the demons Jin & In headed towards the Volcanic Grounds. Noticing the unstable Fire El disrupting the refiner, Edel suggests caution as the Volcanic Flames Entrance is most likely also unstable. Edel expressed great concern of the situation when the group and Ignia returned greeted will less than desirable news, the situations with Lanox's refiner is only getting worse, things only getting worse she impatiently tells the El Search Party that they have to find the Temple of Fire and restore the Fire El. The El Search Party return with the bad news that they had been double crossed by Ignia, Edel was horrified due to what that could mean to the Fire El. The El Refiner begins to overheat, and the building stress of the situations is only making Edel's physical health worse. She asks Sebastian to get painkillers and asks Sdeing if he could help maintain the refiner. Sdeing states he needs his mask to deal with the increasing heat from the refiner and Edel dispatches the El Search Party to retrieve it from Berserk Armageddon. Sdeing was able to stabilize the refiner, but Edel expresses even more concern now that earthquakes have become more frequent ever since Ignia had double crossed them. Elsword promises that they'll go and open the path to the Fire Temple, Edel places her trust in the El Search Party. The way into the temple secured, Edel expresses that they're probably going to face something bigger going on.

Edel believes that demons must be pulling the strings, Raven agrees, especially with how much Ignia always dodged the mention of demons. Edel concludes that they must be after the Fire El. Returning from the Collapsing Temple of Fire with knowledge of a beast controlling fire, Edel informs the group of the Holy Beast Ifritan, the Holy Beast of Fire who kept close ties to the people of Lanox through the Fire Priestess, she believes that if anybody knew what was going on, it would be the Holy Beast Ifritan. She was shocked to learn that the demons had too taken control of the Holy Beast. After subduing Ifritan, Edel urged the tired beast to tell them what happened but Gloria and Darkmoon hold Edel back as the beast is weak and needs to regain his strength. The Refiner starting to lose control once again, Edel continues to express that they are running out of time.

Once the Ifritan regained consciousness, the Holy Beast explains the demon's plot to revive the Demon God in the Grand Cavern: Chasm of the Divided Land. Edel feeling the even greater gravity of the situation, she sends Sebastian to alert all of Lanox. After Ignia regained control of herself and saved Artea, the heartfelt reunion had to wait as Edel was soon to point out that the Demon God Sult was still looming above. The El Search Party was able to defeat Scar, and the El Lady taking control of Elesis was able to seal the Demon God Sult away. Edel was left speechless by the sight.

With Ignia, Gloria, and Darkmoon assembled, the need to reunite the El Priestesses to further the Prophecy of the World's Root became even more certain. The El Search Party came to Edel in order to contact the Priestess to assemble. Fortunately, Edel had already called out to the Priestesses even before they had arrived to Lanox.

Deep in paperwork, Pesop visited Edel with news of the Fire Priestess Ignia's whereabouts. Edel quickly states that the news was good to hear but soon returns to her work with little thought. Pesop criticizes Edel's lack of any emotions towards the situation. Edel states that she doesn't really have any connection with her and that she is a very busy person, saying she doesn't have the time to make friends with everybody. She thanks Pesop for relaying the news and places her trust in the El Search Party to keep Ignia safe. Experiencing some more headaches, she calls Sebastian to retrieve some medicine for her.