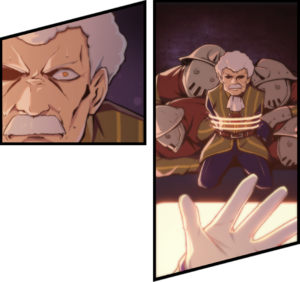 The tyrannical dictator of the Elder region. A powerful monarch with a fascination for Nasods.

Wally was the Lord of Elder. During his rule, he gained an interest in ancient Nasod technology. After discovering various Nasod parts, Wally requested aid from Echo, who supplied him with several documents about Nasods. During his research, Wally encountered Add. With Add's superior knowledge regarding Nasods, he and Add continued to research Nasod technology. With Add's help, Wally was able to construct several Nasod units including Wally No.8, 9, 0 among others, and Add even supplied Wally with the blueprints to construct Nasod Inspector.

Wally and Add closed in on discovering the location of an ancient Nasod colony in Altera with the Nasod Queen Eve. With the newfound information, both Wally and Add plotted to back stab each other. Add confronted Wally in his underground laboratory where he was attacked by Wally's Nasods. Unfortunately for Wally, Add swiftly defeated the Nasod and made off with the information regarding Eve. Afterwards, Wally planned to travel to Altera and began work on his Cargo Airship on the outer rim of Bethma in secret.

Chapter 2: The Secret of Wally's Castle[edit]

Coming to the conclusion that they need to retrieve the power of the El in order to progress their Nasod research, Wally enlists the help of the notorious bandit Banthus. Banthus stole the El and returned to Elder to deliver the shard to Wally who gave him a Nasod weapon in the form of a necklace. During the time, Wally had been preparing to embark to Altera to seek out the Nasods. When the El Search Party and the Elder citizens closed in towards Wally, he escaped on top of Wally No.9 and fled towards Bethma.

In Bethma, Wally continued his mining project in Richie Mines to gather supplies and fuel for the trip to Altera. Before the ship could make its way out of Bethma, the El Search Party was able to sneak into the ship along with Toma and sabotaged it from the inside.

The El Search Party, tagged along the flight to chase after Wally but the ship was struck down by the Black Crow. When the ship crashed, Wally became trapped under the debris. Barely surviving the crash and in dire need for help, he called out for anybody to aid him. Ain heard his calls and confronts the Lord. Ain refuses to help Wally and in an act of desperation, Wally offers Ain anything, money, fame, and even the position of Lord of Elder. Ain asks Wally where the El Shard was, but unfortunately, Wally is unable to tell him, having lost it during the attack by Raven and the Black Crow. After finding no use for Wally, Ain leaves him for dead.