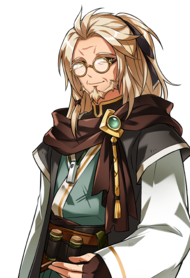 A member of the White-Ghost Army and Aegirp's top engineer, he was sent to Elrios as army's lead delegate in an efforts to help establish peaceful trade relations between humans and demons. Currently assumes a human form and is the parental figure for Mao in the Northern Empire region of Elrios.

Peace Between Humans and Demons

Calonne before his arrival to Elrios was the head engineer for the White-Ghost Army and close associate of its King, Aegirp. When Aegirp launched his plan to establish peaceful relations and trade between Elrios and the Demon Realm, Calonne as his head engineer was a crucial contributor to the King's efforts. With his engineering expertise, it was Calonne to created the portal which the army would use to cross dimensions. Calonne alongside many other of the White-Ghost Army including, Deborah and Gunther were sent to the North Fluone region of Elrios in order to try and form relations. During this time they all assumed human disguises and began to develop trade between realms.

However when civil unrest overtook the Demon Realm's ruling system, Aegirp was imprisoned by his own general, Berthe, now working alongside the upcoming Demon Army. The demons in Elrios were none the wiser of the events transpiring in their homeland and soon all communication between the two ceased. After a blank period with not word from their leader, the group began to lose direction and eventually disbanded entirely, with each member parting ways.

When the Demon Army unleashed their invasion of Elrios, one of their early targets was the Northern Empire's Moon El. Under the command of Ran, they overthrew the Northern Empire with a surprise strike, Ran even taking over the body of the nation's Guard Captain, Aren Haan. During this time, Calonne found Mao who had lost her parents during the demon's invasion, he took the girl in and raised her as his own. At that time, he had stationed himself in the mountains outside of a North Fluone village and found himself an engineer for the village's lord.

Calonne was caught by surprise when Mao brought Laby to their home, due to him instructing Mao not to bring strangers home. He does take a liking to the girl, Laby wonders why the two live so high up the mountain, Calonne explains that he is an engineer and his work sometimes comes with explosive consequences. Laby takes a liking to the machines he's tinkering with and Mao vouches for the girl. Calonne agrees to let the girl stay but also leave soon after, saying that he has somewhere to be. A little bit later, when Laby and Mao went to look for Calonne, they saw that he'd been attacked by the soldiers of the region's lord and they were dragging him away.

Calonne was taken away to the Lord's Keep where he was taken to see Nenya. Nenya offers the demon engineer with a proposition to build a demon portal so he could call for reinforcements for his quest to take over Northern Empire. Calonne refuses the offer of the demon and is locked up in the prison below the keep.

While incarcerated in his cell, he is shocked to hear Mao's voice, he is deeply worried to the kids as they trigger the alarm. Mao asks if he is okay but his is frustrated that the children would get themselves wrapped up in the affairs, and warns that they must escape before Deborah comes. However, they are too late as the Head Jailer shows up. Deborah chastises Calonne for trying to live harmoniously with a human, Calonne rebuttals criticizing Deborah's easily swayed loyalty. Deborah vents her frustrations not knowing if their former master is even dead or alive and believing his ambitions for peach was foolish. Calonne sympathizes with the lack of communication with their superior but cannot agree with her choice to betray everything their army stood for. The clashes but is defeated by Laby. Calonne takes the opportunity to talk to his former ally. Deborah initially rejects his pity, seeing herself only as a mere soldier compared to Calonne who was the head engineer, however Calonne reinforces that their mission was dear to their master's heart and his choice of soldiers would've been key. He truly believed their master's dream and cites his relation to Mao as a true example of it. Having said what we need to say, he departed with Mao and Laby, though he was shocked to witness Laby defeating the demon jailer. He then attempts to confess his true identity to Mao, however, Mao had already suspected such and told him that they needed to focus on what was going on now. They together agree they must take out Nenya himself and proceed to free the Estranged Lord and the rest of the prisoners who then fight their way through the keep.

On their way to the top floor of the keep, Calonne tells the kids what he had gathered, that Nenya was a demon who invaded Northern Empire several years ago who remained in the region, then tries to tell them why they captured him before they were interrupted by the Captain Guard. Immediately after they were ambushed by Deborah, Calonne was furious to see his former ally impeding them once more but Mao points out that she didn't appears aware, Calonne then suspecting Nenya may have done something to influence her. After Deborah is defeated, she admits that Nenya had injected her and the others with his energy so he could control them. Calonne is furious to why they would do such a thing, Deborah citing their desperation. She tells them they must kill Nenya to free them of his control.

Reaching the top floor, Nenya confronts Calonne, asking once again if he would reconsider his offer. Calonne defuses, even going so far to say he could not do so even if he wished. Nenya toys with the engineers, saying that Aegirp was killed and they should make this land their new home. Calonne does not for a moment believe that Aegirp could've been defeated so easily, and his suspicion was confirmed with Nenya's following line, cementing in his mind that his lord is still alive. Nenya insults Aegirp's foolish endeavors in Elrios, calling it a failed invasion, this angers Calonne who truly believes in his lord's ambitions. Nenya manages to capture Mao, he threatens her life if Calonne doesn't agree to make the demon portal. Mao pleas her Gramps to not take the offer as Nenya. Calonne refuses and Nenya attacks Mao which causes Calonne to panic in fear and despair, begging for the child to wake up. Laby goes on to fight and defeat Nenya. Calonne is truly surprised that the girl was able to withstand Nenya's attack and that she emitted some kind of energy, but it wasn't demonic energy as he knew it. Laby asks if Mao is okay, which Calonne thankful find his machine worked as intended, the thanks Laby. He then asks if she was a demon, in which she did not know herself. He tells her that she withstood Nenya like a high ranked demon, but her energy was different. Calonne prompts the girl to find her origins, which invigorates Laby with a new drive to find her teacher again.

After they had returned to their home, Calonne began to build a compass which points towards a source of energy he had learned was nearby. He even suspects that the appearance of that energy was what caused Nenya to begin acting up. Mao wakes up and Laby asks what they planned to do from now on, they planned to help fix up the region and Calonne mentions the demons have begun to put themselves under control. Laby then parts way with the two.

Some time later, Mao begins to worry is Laby made it to her destination. Calonne was confident in his device to lead her the way. Mao wonders why Calonne was making so many honeyed peaches, which he told her he was making in the event Laby returned.

Gaia, Laby, and Ara eventually arrive at Calonne's doorstep in North Fluone, the group inform the White-Ghost Engineer about what they'd come to know about the situation regarding the White-Ghost Army in the Demon Realm and their need for his assistance in returning to the Demon Realm. Learning of this, Calonne was happy to oblige, both for his own interests, but also as a favor for Laby's previous actions.

Arriving in Elrianode, Calonne introduces himself as head of the White-Ghost Army's R&D department as well as their delegate for Elrios relations. The El Search Party catches Calonne as well as its members on everything regarding Berthe and such before Add demands he give them what he knows. Calonne complies and mentions his thoughts on Bethe prior to being stranded in Elrios, noting that he was cruel but being surprised he would betray Aegirp. With everybody caught up, Lu mentions their ongoing promise to Winster and they group make their way to the portal.

Calonne inspects the portal in Debrian Laboratory and assures he could make due with it. He provided the group with his knowledge of a soul fragment's location and advised they not teleport straight to the White-Ghost capital. While he was not aware of the Aurora Base's location, he managed to speculate it would be relatively close to the Deep-Sea Tunnel that connected White-Ghost territory with Varnimyr and set the coordinates to the general area, suggesting they seek out the Nous Base. Raven notes the territory being a hub a sort for trade, Calonne agreeing that his lord had always believed in mutually beneficial policies. Soon enough, Calonne had prepared the portal. Before the El Search Party departs, he tells them there are 5 fragments and only those worthy can absorb them.

After the El Search Party departed, Calonne spoke with Ventus and Rosso asking if he may use the portal again.