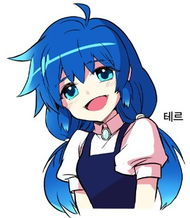 Ciel's now deceased younger sister. In their youth, she adored the freshly baked cookies in Lanox but could not afford the expensive cookies. She and Ciel promised that one day they'd be rich and they could bake as many cookies as they wanted. However her life was cut short.

She and her brother Ciel were close. Terre often adored the fancy cookies which lined the bakeries of Lanox. However, their family not being rich, they could not afford it. She and her brother promised that one day they'd become rich and bake as many cookies as they wanted. Unfortunately, they would not be able to fulfill their promise as Terre was among those who died when a gang murdered Ciel's family.