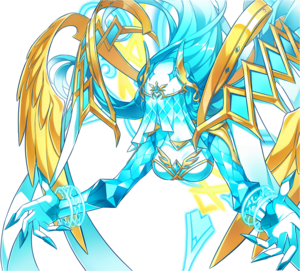 A goddess who served under Elria. It was Ishmael who truly believed and cared for the material world, she gave the barren land the El Shard which brought prosperous life. She would later possess a human girl in an effort to protect Elrios as the El Lady.

After centuries of advancement, the people of Elrios became to make use of the El's power. With the invention of Nasods the power of the El began to drain and eventually war broke out between the humans and Nasods.

After the Nasod War, the El exhausted, the land began to be consumed in chaos. The seas spilled over the land and the earth began to divide. Ishmael wishing to protect the world took a part of her spirit into the body of a female who resonated with the El. With her powers, Ishamel stabilized the El and brought order back to the world. The lady had been blessed by Ishmael and become known as the El Lady. She was celebrated and revered for her actions having saved the world from near certain doom. However in the end, the El Lady needed to give herself over to the El and become one with it in order to ensure its stability for the immediate future.

The legacy of the El Lady would continue as Ishmael's spirit would move on to another individual who would continue the cycle of protecting the El and maintaining its form for generations to come.

500 years before the present day, Ishmael sent an angel, Ain, down to Elrianode on Ishmael's Night. The angel's job was to repair the long damaged El and restore it to its original state before it nearly collapsed during the Nasod War. However Ishmael's agent would be unsuccessful in his mission as that Ishmael's Night, the El Explosion would shatter the El into millions of pieces and send her agent into the realm of Henir.