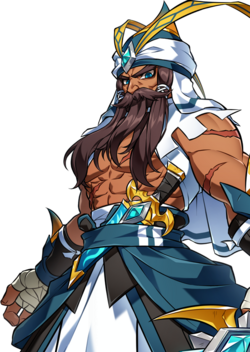 The Great Battle Chief of the Caluso Tribe. Protector of the Wind El and his tribe. The strongest of the Caluso Tribe, and a well respected leader in the Sander region. He rose the ranks to be their most powerful warrior. He lead his men to defend Sander during the great battle of the Behemoth.

While not present, it can be assumed that Karu lead much of the battle against the out of control Behemoth alongside the other Caluso chiefs.

Karis arrived to the Caluso Tribal Village where she used her dark magic to corrupt the Wind El and turn it into a Dark El. Unable to resist the Dark El's influence the Caluso Tribe were working under Karis's command.

When Emirate went on his own to the Caluso Tribal Village to relay information about demons being involved, upon arrival Karu send his men to capture and lock up Emirate. With Vapor's plan to overload the Wind El with Wind Energy, the El was able to push out the dark energy and the Caluso Tribe was able to regain control of themselves. After the group explained the situation to Karu, Karu agreed to do whatever to it takes to prevent Karis from reawakening the Behemoth and repeating the tragedy that befell the last Wind Priestess.

After getting word from the Caluso stationed at Parugo Mountain, Karu was notified that the worst had come, Karis had successfully reawakened Behemoth. Needing a way to counter the situation, Karu excavated the Sandtilus. Still requirement fuel, he alerted his right hand man Vegar to search for Wind Stones alongside the El Search Party and Sander citizens. With the help of Vapor the Sandtilus was up and running and Karu alongside everybody else went into battle to prevent the Behemoth from destroying Sander.