Information: This page features an Epic NPC, they are not playable nor can they be unlocked. More info can be found here.
Language:
Blood Colonel 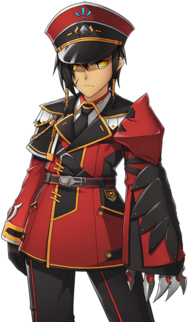 Edan uses a powerful bloody sword that is one of a kind. It is said that he made a deal with something outside the realm of Elrios. No one really knows if it's true or not, but his uniform used to be white. The red is from all the blood stains from his fallen opponents. There is an old Feita folklore about a cursed demon sword hidden in this region's caves. Could he have made a contract with the sword? 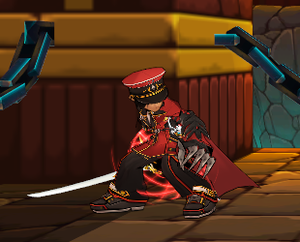 Edan has access to all of the Blade Master combos with the following modifications:

Thanks to his ability to escape 99% of combos from behind, constant invincible framing with his love affair with Shadow Step and ability to siphon HP from you, Edan is the most resilient of the Monster Trio (Valak, Edan and Q-PROTO_00). He can also be considered the most punishing thanks to his permanent Bloody Accel buff: just one combo, or even hit, from Edan will significantly impede your movement capabilities due to the Bleed debuff. Thus, one combo from Edan easily leads to another, as you can expect him to constantly pursue and chase you with his Shadow Strafe, which has no chance of knockdown. Fighting Edan can be an extremely frustrating affair in this manner, leaving you with no chance of escape, or even effective counters, as the loss of dashing removes most characters' faster clashes. Staying clear of Edan for long is not an option either: like all members of the Monster Trio, he is capable of Roaring if you stay out of his field of vision for too long, exerting significant pressure on you to stay in the game lest Edan turn the tables with one shout.

Of all three members of the Monster Trio, Edan has the longest combos, and is not very apt to knock you down. However, Edan also has the weakest combo hits, relying on repeated combos to take your HP down rather than any one single combo like Q-PROTO_00 or Valak. However, he does this very effectively thanks to his Bloody Accel passive, which causes Bleed whenever he hits you, drastically increasing chances of him getting more combos off you after he's concluded his first. To null this advantage, it is very important for you to wait for the Bleed debuff to wear off before attempting to engaging Edan again - it takes 5 seconds for Edan's Bleed to wear off. If you are knocked down, maximize your knockdown time by staying still and rolling away from Edan at the very last moment. After getting up, immediately get out of Edan's hit radius. Aisha has this easy thanks to teleport, but the other characters can also compensate by maximizing their air-time strategically, as Edan has a lower chance of knocking you into another combo if you are airborne.

Edan's Emergency Escape also makes him a pain to approach offensively, because of his tendency to Strafe straight out of combos. To negate this, allow Edan to approach you, rather than attempting to capitalize on errors so you have a higher chance of hitting him from the front. Edan is a huge fan of Shadow Step as a mobility tool; however, it has a fixed range, and its final strafe has a limited range, especially vertically. For this reason, it is easy to bait out a Shadow Strafe, awaiting Edan at the end of his Strafe with a set-up once you are used to his range, allowing you to combo him numerous times. Alternatively, if you are a character with a skill whose hitbox can hit in a range far in front (e.g. EM's XZ, BtM's Magical Makeup XX), you can simply corner Edan and spam away as his Shadow Step invincibility wears off faster than he can move. Eventually, Edan should automatically correct himself and face you, permitting you to just continue the combo as usual.

Finally, while his skills are really nothing to note, his Berserker Blade and Wolf Fang is often used when approaching you, so just keep in mind that he may vary is strategy of approach so you aren't thrown off in case he chooses to use a stray 100 MP. Berserker Blade is notable for its ability to ignore defense, so it can still deal a significant chunk of damage, so watch out for that.

Avoid hitting him in the air, or he will retaliate faster than you can react.