Information: This page features an Epic NPC, they are not playable nor can they be unlocked. More info can be found here.
Language:
Lord of Pain 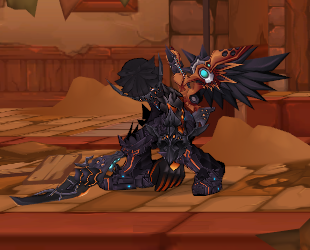 Valak roamed around Velder in his heavy armor. In fact, we don't think he takes it off when he showers. He believed everyone was jealous of his powers and keeps it on in order to protect himself if he's ever ambushed. The demon that bonded into the armor has taken over his true personality. His armor can be damaged but his claw can still tear enemies apart. One day, he encountered Edan in the forest and they fought day and night. No one dared enter the forest until the clashing sound of swords stopped. Now... there is a search party looking for Colonel Edan.

Valak has access to all of the Reckless Fist combos with the following modifications:

Valak's passive "Scar of Pain" makes him a huge threat. Compounded to that, he is able to roar, forcing you to stay within his range. Catch him or die.

Valak's skills do not pose as much threat as his combos. He will spam Valkyrie's Javelin mindlessly even if you are on a platform below him. He also likes to use Charged Bolt, however due to its size it is likely you won't get the full damage as you are knocked out of it.

Avoid hitting Valak when he is in the air, he will always retaliate faster than you can react.