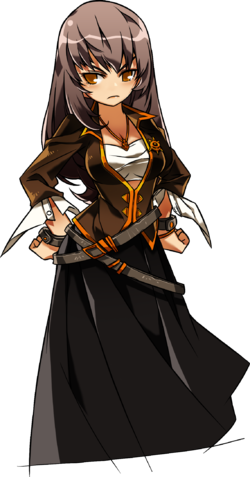 Stella is the type of woman who makes all the boys stop and stare. Don't stare too long, or you may be looking up at her from the flat of your back or through a pair of black eyes. Check her out, though (carefully), because she might have something for you to do.

Stella used to be the head sheriff for the Velder Kingdom. Due to certain disputes regarding her mannerisms and methods, her position was reassigned to the Bethma region.

When the El Search Party arrive in Bethma, Stella was occupied by Richian who was filing a complaint about noises coming from his family's mine, the same mines the El Search Party suspected Wally may have retreated to. Stella alongside Chacha Buch pointed toward the Lizardman problem which both took priority and barred safe access through Bethma Valley. The El Search Party explain their need to investigate the mines, but while she understands, she cannot let them go through while the Lizardman are still an issue. Handing the group over to Chacha Buch to investigate the disturbance.

After thwarting Kayak's plans, Stella congratulates the group's successful efforts before realizing who Elsword was, as the Knight Captain's little brother. She confirms they'll keep Kayak under watch and gives the group permission to investigate the mines with Richian.

"Hey, there! You've got something far better than expected. What about exchanging it with what I have?"