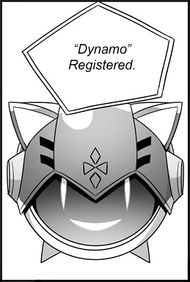 A Nasod created to manage and guide Add when he was to be sent to the library containing massive amounts of Nasod Research the Grenore family had accumulated.

Dynamo was originally created by Asker as the key to activating the weaponized battles codes inside of Edward and maintain the data inside the Nasod library. However, Asker's wife Grace would compromise Dynamo's original coding and force the robot to redirect the name inputs and bypass the battle codes.

When Edward was able to escape from his slavery, he found himself falling and taking refuge inside a strange library. Inside, he encountered Dynamo. Having been created to maintaining the library's data and guide Edward, Dynamo soon scans and recognizes the Grenore child. The robot soon input stores of the library's data into Add immediately. Once Edward regained consciousness from the data input, Dynamo soon requested that he input a name. Edward gave the robot his name but the robot recognized it as Add.

With Dynamo's help, Add was teleported not only out of the library but 300 years into the future. Add soon gets tasked by Echo in investigate a series of EMP signals coming from inside Elder's waterways. On his way to check it out, Add in confronted by Banthus's goons, soon to be pummeled, Dynamo swoops in and knocks the bandit out. After that, Add was soon given the idea of channeling the robot's energy as a weapon, and successfully does so. Next he heads into the Underground Waterway where some of Wally's soldiers find Add, using his new powers, Add defeated the largest soldier with easy causing the smaller two to flee.

Return to the Library

While investigating the waterway, Dynamo soon reacts to old Grenore techonolgy. He stumble upon a secret path which leads to on of the family's old laboratories. Add, having learned about his mother's fate, demanded to see her once again. With the help of Dynamo, the two teleported back to the library, however things looked different. Parts of the library were beginning to collapse due to a lack of energy. With the amount of energy left being largely insufficient for time travel or even teleportation. Dynamo uses up his energy to conserve the library for a little longer while Add looks though the remaining contents. However the also caused the robot to cease functioning.

With the extended time provided by Dynamo, Add read through the entire library in solitude, searching for a way he could travel back in time to save his mother. Eventually coming to conclusion that he needs the cores of a high grade ancient Nasods, Add finds it time to him to leave the library. Running into the remains of Dynamo, Add uses the robot's chip as the base for a new weapon. The Nasod Dynamo he currently uses.