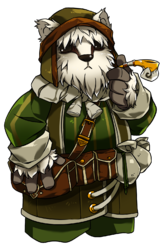 Chief Adel is the wise man of Altera Village. He oversees the welfare of his villagers while also teaching young Ponggo about literature and writing. The Chief is over 100 years old – quite unusual for a Ponggo whose average life span is much shorter than humans.

Adel is the first Ponggo the El Search Party meets. After Wally's Cargo Airship was shot down and crashed onto Altera, Adel found the group amongst the ruined airship. After the El Search Party explained their situation, Adel became convinced that the ones responsible for the airship's destruction was Raven and the Black Crow. Adel explains that the Black Crow has been active around Altera's air space, trapping the Ponggos on the island and attacking the village. He also explains that the Nasods run the island and have kept the Ponggos trapped due to their knowledge about Nasods. It is revealed that the Black Crow mercenaries were all augmented human by Amos and based on Elsword's account, Adel suggests that Raven might be trying to suppress his mind control and maintain his humanity. The group retrieve an unconscious Raven back to the village.

Adel then suggests some of the group go to the Return Plains to see if they can find any leads. Aisha and Rena leave while Elsword stays to look after Raven.

When the El Search Party return to the village, they had now successfully reclaimed the El that was stolen. Elsword and Aisha talk about Eve who they left at Altera Core, Adel is curious of their conversation. He is warry of the remaining Nasod but chooses to trust the El Search Party's judgement. Adel arranges the village to repair an airship for them to depart the island and thanks them for giving them back their freedom.

With Altera no longer under thread of the Black Crow and King Nasod, the Pongos were able to live without fear. Adel comes to the construction site after hearing the Amos had some big break trough he wanted to show. Unable to find Amos, Adel runs into Agatha. He checks with her on how much progress had been done for sealing the Transportation Tunnel B4-1, and Agatha confidently states that the project is nearing completion. Adel reflects on how much has changed, Agatha feeling thankful that the El Search Party stopped both the Black Crow and King Nasod. Digressing, Adel asks Agatha where Amos was. Just in time, Amos came in with his research.