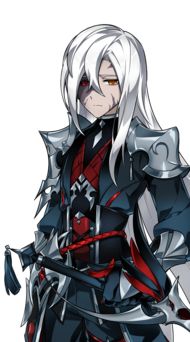 Ara's step brother and the strongest warrior of the Haan family.

Before being possessed by the demon general Ran and invading Hamel, Aren Haan was a blood descendant of the famed Haan family of the Northern Empire Xin and the most respected son of the Haan family. He was loved by everybody in the clan. At some point, his mother died of unmentioned reasons and in time, his father had fallen in love with a new brave woman. Admiring her courage, Aren's father persisted her to marry until she accepted. Along with the woman was her daughter Ara. Whilst his new mother got along with his father perfectly fine, his siblings constantly teased her and Ara. Aren, however, chose not to partake in such actions and treated them much like family.

Even when Ara felt depressed, saddened, and not knowing what she should do, Aren was there to comfort her. He requested to spar with his sister. He easily dodged and deflected her early attacks. Knowing his sister was hesitant, he pushed her to become more serious. After she won with her spear right below his chin, Aren admitted defeat. He tells his sister that she should devote herself to her training and one day, she will be able to openly express herself.

Sometime before the festival gathering, all of the powerful families of the Northern Empire arrived. Aren alongside his entire family went to the Northern Empire's capital to attend the festival and remain on good terms with the Emperor. During the festival, one of the main attractions was a sparring competition between the various families, but Aren injured his arm while riding horseback and could not participate. His fellow siblings compete but despite the Haan family's famed skills, they were defeated by members of the Jin family. The Jin family was disappointed that they were not able to fight the Haan family's best warrior but were happy that their family was victorious. However, Aren spoke up and mentioned that there was one more member of the Haan family which they had not fought yet, his step-sister Ara. Ara heard her brother's words and stepped forward. She competed against the Jin family's fighter and won the battle. Aren watched the battle and when it was over, he spoke confidently to his sister that he was right about her all along.

One day, Aren partook a post in Fahrmann's capital and left the village of Isshin. The demons came from the Demon World and attacked Fahrmann, starting with the capital. Unable to defend against the demon invasion forever, the capital fell and Aren's strong connection to the Moon El made him a prime target for the demons.

Losing the invasion, he came upon the demon Ran, who would take control of his body. Aren struggles under the control of the demon but his struggles are not enough to break free of his control. Under the control of Ran, he would partake in the demon invasion of Elrios. Despite being under Ran's control, Aren is still able to have a slight grip over his body and continues to try and fight off Ran.