Information: This page features an Epic NPC, they are not playable nor can they be unlocked. More info can be found here.
Language:
Green Forest Ranger 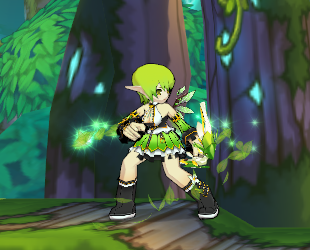 Lime's purpose is to guard the forest and protect mother nature. She trains her combat skills in the forests of Elrios and focuses mostly on her kicks, which are proven deadly, though her skills with the bow are lacking. However, she can summon the wind spirit to strengthen her bow if she is in a tight situation.

Lime has access to all of the Wind Sneaker combos, as well as extended combos not available to players.

Don't attack her headon as she will catch you into a combo. Circumvent around her and strike. Try to separate her from the other Epic NPC (if there is one) as her Sharp Fall leaves you stunned for a combo.