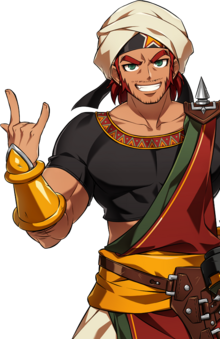 When Sander faced desertification, Emirate led the efforts to build a new village and soon became the chief. Fondly known as Red Beard, he is an excellent leader and an experienced former mercenary, virtuous and considerate, though meddlesome at times. He still thinks of Barren Sanders future, and aims to maintain good relations with the Caluso Tribe.

In the past, Emirate was a mercenary of Sander and a very adept fighter. He worked his way up to becoming Sander's chief. Since his appointment as their leader, he's put forth many restoration projects both in the village and the surrounding area such as Barren Sander.

After the El Search Party is sent to Sander, Emirate is informed of their arrival as well as their success in both Velder and Hamel, forgetting about Feita which Elsword corrects, followed by Eve telling him not to be arrogant. Once Elesis asks for the Wind Priestess, Emirate informs the El Search Party that the Wind Priestess lives in the Caluso Tribal Village and is on her way to Sander as they speak. He suggests that they should rest until she arrives.

Following Vapor's suggestion, Emirate agrees that Garpai Rock would be the next place for the team to investigate. Emirate wants the group to see if the Wind Priestess is still held captive by the Harpies. Unfortunately, when the group returned, they found no trace of her. In hopes to stir Kelaino into meeting in Sander, Vapor gives a harpy feather to Emirate and tells him to give it to Kelaino. Emirate states the feather has been forbidden from Sander's trading market, due to the great animosity between the human and Harpies due to Harpies being hunted for their feathers in the past. When they successfully bring Kelaino to negotiate, she lashes out with accusations that Harpies were being hunted down again, an accusation that Emirate firmly denies. Kelaino, unsatisfied with what she heard, sends Aello and Okypete after the messenger they sent to the Caluso Village. The two harpies were stopped by the El Search Party, much to Emirate's relief.

After listening in on the conversation between Vapor and Kelaino, Emirate exclaims that the demons were behind it. Vapor suspects Anduran was taken to the Trock's Lair, which Emirate responds by sending the El Search Party there as he heads toward the Caluso Tribal Village himself to inform them about the new information.

After arriving at the Caluso Tribal Village, Emirate was attacked by the tribesmen and held captive. He was rescued when the El Search Party became concerned when no word from Emirate had come. Once the El Search Party concludes that Karu was being hypnotized much like Trockta, Emirate reunites with the Search Party to negotiate with Karu after breaking his trance. Once Karu regained control, Emirate and Chung explains the situation.

As the Behemoth awakens, Vegar came to request assistance to supply one of the Caluso's ancient airships with Wind Stones for fuel. Luckily, Emirate has found a supply of Wind Stones held by Trocks near Wind Stone Ruins. As they board Sandtilus while the assault on Behemoth continues, Emirate acted as one of the lead commanders working alongside Karu, Vegar, and the other Caluso chiefs. With the use of a control device, Emirate was able to immobilize the Behemoth so the El Search Party could dive down and retrieve the Wind Priestess Anduran.

After Karis was defeated, Emirate thanks the El Search Party on behalf of all of Sander, wishing that he could do more for them.

After the defeat of Karis, the various factions in Emirate began to once again negotiate peace treaties in order to restore trade and commerce through the desert city. With the Sandtilus now restored in working condition, trade in the Sander region and the rest of Elrios was spiked dramatically. Amicable relations between the merchants of Sander and the harpies were once again formed.

One day, Emirate was called in by Vapor, she explains that the large El had been restored and Anduran is with the other El Priestesses and the El Search Party wherever the large El may now be. Emirate trusts Vapor's news and asks if the Caluso Chieftain Karu knows of the information as well. Vapor tells Emirate that Karu was actually the first to know of it. Emirate states that he trusts the El Search Party and that thanks to their help in squashing Karis's plan, Sander has not only been restored to its former state, but trading has blossomed thanks to the recovery of the Sandtilus.

Vapor boasts that she was right about her feelings towards Elsword, Emirate was quick to point out that she just scolded the boy the entire time. Vapor irritated by Emirate's statement started to spray some kind of potion at him.