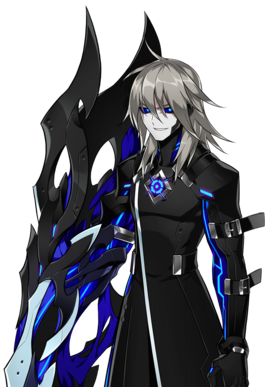 A mysterious hooded figure drenched in the chaos of Henir. A general of Henir's Order he is in charge of the investigation of the recently reawakened Elrianode.

Hennon had been searching ruins of the ancient Elrian Kingdom. In his search, he noticed Aisha and her grandfather Kuenbaran performing their search of the same Elrian Ruin. He lurked in the shadows and observed them from afar.

When Aisha went off on her own to search for clues on how to enter the ruins, he followed her. Trailing behind, he saw Aisha discover the entrance to the ruins and even discover information on the Ring of Mimir's location. As Aisha left the ruins and reuniting with her grandfather, Hennon stayed in the shadows out of view. Deeply intrigued by the revelations that had occurred, he decided to continue lurking behind the girl.

To no surprise, when Aisha and her grandfather made it to the supposed location of the Ring of Mimir, the man was not far behind them. As the two traveled through the Elrian ruins, Hennon made sure to follow Aisha, and she led him straight to the Ring of Mimir. After Aisha regained consciousness from first wearing the Ring of Mimir, Hennon appeared before her. Aisha worrying about the ring's power planned to cautiously remove the ring, he agreed with her plans.

Aisha was surprised to find the man, fearing that he might be after the Ring of Mimir, she threatened to launch fireballs at him. Hennon shrugged off Aisha's threat and threatened her back. Aisha in retaliation started firing at the man but he blocked all her attacks and deflected her fireballs towards the walls. He expresses his dissatisfaction with Aisha and tells her that the ring isn't something that should be in the possession of people, expressing that he will remove the ring, even if it means using force.

Aisha shot at the environment to cloak her while she tried to escape. Hennon was blinded for a moment while Aisha hid from him. Searching through the ruin's looking for where the girl was hiding, Aisha took the opening she got to strike him in the back. He disappeared prompting Aisha to try and make her escape, however he cut her off, sending his own fireball back at her. Aisha backed into a corner, the man requested she hand over the ring one last time.

Aisha in a moment of desperation used the power of the Ring of Mimir. Feeling the infinite magical energy coming from the ring, she tried to fire a powerful fireball but instead the ring began to siphon her energy. Hennon expressed his sentiments, that the ring wasn't something for humans to possess. He walked up to the collapsed girl and took the ring. He put in inside his cloak before leisurely walked away and disappearing into the shrine.

With the Ring of Mimir in his possession, he gave the ring to his superiors to further the Order's agenda.

After Elsword restored the El and with is reawakened Elrianode, Hennon and his minions had their opportunity to return to the lost city.

With pre-existing knowledge of the location of Henir's Passage, Hennon and his colleagues went to Debrian Laboratory underneath the old palace almost immediately. There they made their way to the Passage to Henir's Core and reactivated it. Using that energy they managed to open a portal to the Demon World. With a gateway open, Hennon was able to extract a piece of the Demon World's Dark El for himself, with half of his plan already completed, he only needed to get the Primal El located in the Water Dragon Sanctum.

After the El Search Party undid the seals to the Water Dragon Sanctum, Hennon and his minions sprung into action. Appearing before the group fully cloaked, he formally expressed his gratitude and thanked the group for undoing the seal. Lu sensed that the mysterious man was not a normal person and warned the others. Lu sense demonic energy from Hennon, but felt as if the energy was coming from something he had in his possession. At the shrine, Hennon was able to retrieve the power source sealed off in the sanctuary, a piece of the Primal El. With what he was looking for in his possession, he planned to take his leave before Aisha recognized his voice as the same man who had stolen the Ring of Mimir from her. Glancing over, he was surprised to see a familiar face as well. Aisha demanded he return the ring back to her in which he responds that the ring was never her's in the first place. Aisha pleads for her power which is trapped in the ring, however he sees that power as a simple donation for his greater good. After a good laugh, he excuses himself and flees.

Having chased him through the Water Dragon Sanctum, Hennon was impressed by the group having chased him this far. Not taking the compliment, Add demands the El and Elsword demands Aisha's ring. The man tell the group he's on a busy schedule, and has places to be. Instead, he leaves the group behind with the Skin Splitter to keep them entertained. With them distracted by the Henir beast, he takes his leave out of the sanctuary, making his successful escape, losing the El Search Party. However, Ventus who was lurking in the shadows was able to nab the Primal El in his possession and replaced it with a fake without anybody even noticing.

In time, Hennon soon realized that the Primal El he has in his possession was a fake. Enraged by the discovery, he knew that the El Search Party or the El Masters must have the real Primal El in their current possession and decided to take the opportunity to launch an all out assault on Elrianode.

Leaping out of a fissure of Henir, Hennon announced his entrance to Elrianode and proclaimed his ambitions to not only take the Primal El back, but to take the Large El as well. In a moment's notice, countless other Henir fissures opened surrounding the entire city, out of them came hordes of monsters who stormed the El Tower and the El Search Party. The El Search Party did all they could to fend off as many of the monsters they could while dealing with Hennon. In a surprise attack, Hennon was able to get a clean shot at Elsword. Elsword got knocked down and Hennon was able to retrieve the Primal El which was in his possession. Getting back on his feet, Elsword demanded to know who the mysterious man was and what Henir's Order's ambitions and goals were. Hennon believing they wouldn't live to tell anybody else decided to humor them. He revealed his identity, being Hennon and that he was soon to be the most powerful member of Henir's Order. He then tells the group that Henir's Order plans to use the Primal El as a means of spreading their ultimate Seed of Life. He promises the group that he would sure to leave a thank you note when they're done, however expresses that Elrianode will soon be wiped off the map again.

Elesis expresses some confusion believe he was planning to use the Primal El to get into the Demon Realm. Hennon does applaud them for doing their homework however tells them all that his plans have changed since they found a way to get to the Demon Realm using the energy they gathered from Henir's Passage. Elsword lashes out assuring that they will not stop till Hennon falls. Hennon wanting to rid them now before they become more of a bother accepted his challenege.

The El Search Party were able to defeat a cloaked Hennon. He admits that he had underestimated the group and threw away his cloak, revealing that he has already been affected by the Seed of Life. No longer toying with the group, Hennon fought the group seriously. His efforts however proved insufficient as the group were still able to defeat him. Frustrated at the turn of events, Hennon believed he could use his final trump card, the Primal and Dark El. Hennon began to laugh before pulling out the two El's in possession. Everybody was shocked to see that Hennon already had a piece of the Dark El in his possession. Combining the two El, he transformed into a massive monster with never before seen unparalleled power, the Interdimensional Colossus. Having turned into the giant beast, Hennon lost all control of his body. The El Search Party fought against the Interdimensional Colossus, while the battle was one of the most difficult they had ever faced, they were eventually able to triumph over it, defeating Hennon once and for all.