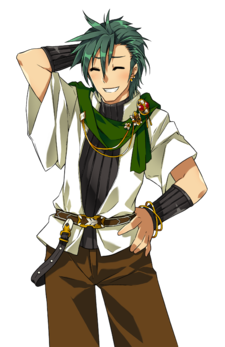 Praus began making necklaces for Hanna, to express his love that remains unrequited. He enjoyed it so much that he became a jeweler. That's just as well, because his proposal was rejected. He is passionate, sensitive, considerate, but also blinded and bubbly.

Praus is a refugee that retreated with the other Velder citizens to the city's outskirts, where he sells accessories to travelers and aid in the recovery process of Velder. He stays around and comforts the children and other refugees.