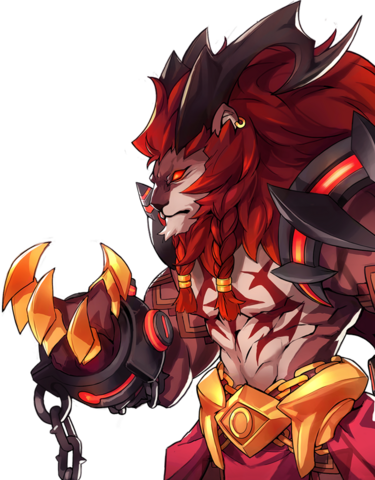 The Holy Beast of Lanox. Unlike many other Holy Beasts like Ancient Phoru, Ifritan stayed close to humans and kept in touch with the Fire Priestess Ignia. However he became controlled by the demons as they traveled deeper into the Temple of Fire.

The Holy Beast of Fire

Unfortunately when the demons attacked the Temple of Fire, Ifritan was taken over by the demons and lost control of himself.

Inside the Collapsing Temple of Fire, the El Search Party spotted a beast able to control fire, which Edel recognizes as the Fire El's Holy Beast Ifritan. Pesop and Steel tried to calm the beast with offerings to try and snap him out of his mind control however their attempts proved futile. Without options the El Search Party fought Ifritan till he collapsed of exhaustion. The beast unable to move, Gloria and Darkmoon took care of the Holy Beast and fed him Fire El so he could regain his strength. Rejuvenated, the beast was no longer under the control of the Demons. He told everybody of the atrocities that the Demons were planning to do deep inside the temple. He tells them, with the Earth Priestess Artea, the Demons opened a giant chasm and plan to use it to revive the Demon God. He also tells them that they had kidnapped Ignia and had made here cause the Fire El to go rogue.