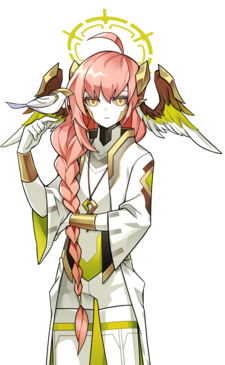 The accessory merchant of the Nasod kingdom in Elysion, Theodore creates and collects Nasod birds. He has created so many that he needs help keeping track of all of them. These pets help him by relaying to him what they see.

Theodore had asks for assistance in finding a few Nasod Birds he had scattered throughout the city of Elysion. As a gift for the adventurer's help, he gifted them a Nasod Bird of their own.

Theodore had been sending out Nasod Birds all throughout Elysion and many made their way to the city's underside where they encounter Solace's Fortress. Unfortunately, due to the extremely potent El energy and devices which siphon energy out of the surrounding machines, many Nasod Birds which came close to the area ceased to function almost immediately.

Nearing Solace's Fortress, Durenda's army ceasing to function and the group were attacked by ominous looking Nasod soldiers. Reaching back to Elysion, the group worry how they'll progress when Theodore pops out of nowhere. He introduces himself as having been watching them from the sidelines. Theodore offers to strike a deal with the group, that they would retrieve the birds he had lost in Solace's Fortress. While Aisha refused to take part, Theodore soon recited every event they had taken part in every since they arrived to Elysion. Convincing the group he knows a lot, Add agrees to Theodore's terms or finding his birds in exchange for valuable information regarding the fortress. Theodore mentions a large Diceon machine which caused his birds to stop functioning when getting close. After the party brought back the Nasod Birds, Theodore was able to pinpoint the device's location but recommends the group see Hugo for further help.

With the assistance of Hugo the group way able to destroy the core inside the fortress and Theodore greets them afterwards, Elsword tells him that the soldiers are still actives, he speculation that there are multiple cores scattered through the fortress. Looking into hit he pinpoints two more cores, unfortunately the two cores are linked directly to the center most area of the fortress, he also elaborates that the biggest core is taking in a lot of energy from the other cores. He notices that the main core is supply all the energy for the soldiers and machinery but still has a lot of energy to spare, energy which he describes as being similar to the giant El. He sees the group off and warns them to stay cautious of the central core.

After the Solace had activated his Diceon device, Hugo was given a surge of inspiration to device a machine of his own. Ever since, he and Theodore worked together on this new machine. Unfortunately, due to past failures, the two were under the watch of Durenda who was concerned that their experiments could spell the destruction of Elysion.

In another one of their attempted experiments, Durenda noticed their actions and watches over them. Hugo insists that she help them out. Theodore siting that they were inspired by Solace's Diceon machine, and that he was helping Hugo's development. Durenda does much care for the two's work but warns them that she doesn't want to see any more explosions from the two. Hugo promises that his latest version will not cause another explosion. After adjusting a few things, the devices reacted and exploded. Hugo was in a state of confusion on what had gone wrong. Durenda recovering from the explosion lashes out at the two and swears to report the two to Adrian directly.