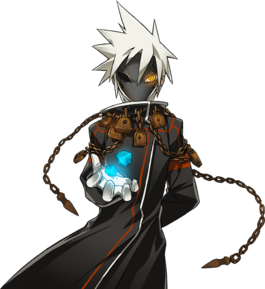 A mysterious masked man who appears to be the owner of Henir's Time and Space.

"An adventurer challenging time and space... ...Heeheehee... ...Well, what would happen?"

Glave was once a human who went searching for the absolute truth. The greater being punished him, and in his transformation, he lost all human emotion. He now deals with his boredom by opening the challenge of Henir's Time and Space to young adventurers.

In times long past, Glave, or the man now known as Glave, was a brilliant researcher and scientist, even finding himself as part of the Elrian's Kingdom most prestigious organization, Seven Tower. He performed his own private investigations and experiments in his own personal quests for absolute truth. In his research of Henir itself, he created a machine with the power of extracting life, turning inside out, and creating new life. He named this device as the "Seed of Life". Knowing its implications, Glave decided to seal it away in a place nobody would ever find it.

In the end, his research would have consequences. Punished by the "Creator", Glave was sealed off and sent to Henir, to maintain the gateway of a small portion known as Henir's Time and Space. In the process, he lost a woman, someone dear to him, as well as his emotions and real body.

Administrator of Henir's Time and Space

While he became tied to Henir, he laid witness to a crucial event for the Debrian researchers working underneath the palace of Elrianode. Their experiments in Debrian Laboratory resulted in the group accidentally opening a passage to the core of Henir itself. Trapped in Henir, Glave saw what the Debrians had done from the inside.

After the El Explosion, the power of Henir began to seep through into Elrios and in the process, a time-space enigma occurred in the now ruined temple of Seven Tower. Glave had become tasked with managing the gateway in the temple. Glave as the gatekeeper of a portion of Henir's Time and Space, he would allow adventurers into his realm to do battle with powerful foes materialized in the dark dimension. His most noteworthy participants being the El Search Party. His service provided the ancient man with some form of entertainment as he continued to protect the seals between Elrios and Henir.

Chapter 29: Invasion of the Order

Glave stood in Elrianode gazing off into the spreading expanse of Henir. The El Search Party showed up and Glave greets them, having not seen the group for some time. He asks them if this spread of Henir was their doing. Aisha replied that they didn't have anything to do with it, but admits to having everything to do with Elrianode's revival which in turn was the cause of the spread of Henir. Glave chuckles at the group, expressing that they always impress him. Chung asks if the situations is grave which Glave replies that it certainly isn't good, however expresses that Henir itself isn't inherently bad. He goes on to tell the group that Elria herself created this world with Henir's Chaos and their mortality is living proof of that fact. Aisha is surprised by this since she has never heard a detail of this idea from all the historical texts she had read. Having digressed long enough, Glave asks the group what they really want. Rena shows Glave the orb they had found and to Glave's surprise it was his own invention, abet modified. Elsword expresses curiosity with Glave's familiarity with the device, Glave tells the group that the device is his invention.

He tells the group that he had once called it the "Seed of Life" and he had sealed it away a long time ago. Rena comments on the name as being of bad taste. Glave then goes on to explain that the device had been tinkered with, Chung is unsettled by the news and asks if Glave had any idea who may have brought the device back to the surface. Glave states he doesn't know but speculated the person must've been a Seven Tower member. Aisha recognizes the name saying that her ancestors used to be part of the organization. Glave was surprised to learn Aisha was a Landar and continued, saying that the Landars were the Seven Tower's first advisers when it was founded. That they also left Seven Tower before he got captured. Elsword asked why and Glave explained that the organization split, but he couldn't discuss further due to his constraints. Add tells the group what he knows about Seven Tower and the Debrian's experiments, concluding that Glave might have been the one involved in opening a passage to Henir. Glave corrects Add that he was already the Administrator of Henir's Time and Space and only witnessed the events. He questions why Add even came here if he knew everything already. Raven asks if the Gate of Henir he had been letting them in was the same passage from back then, however Glave says his area is a mere fraction of the inner world, that if he had open the way to the core, Elrios would cease to exist. Rena asks if he could tell the group the location, however such information is truly against his contract with Henir. He however gives them a hint telling them the experiment was conducted below the Ancient Elrian Palace, however the city's layout has since changed many time over.

After the group left, Glave refuses to believe he helped them. Lamenting the woman he lost, calling his actions as an excuse for her, from his former self.

Standing and observing from the outskirts of the the city, Glave was impressed that the El Search Party was able to defeat the Interdimensional Colossus. He was equally impressed that they had found the secret of the Primal El, something that he wasn't able to do till he had already been incarcerated by Henir. Overhearing that they plan to head to the Demon Realm next, he finds their choice of actions either brave or completely stupid, not expecting them to come back alive. However, if they were to, it would be quite amusing for him. Unable to do anything else, he find himself contempt with waiting, and seeing how things turn out.

Soon after Hennon's defeat, Gates of Time began to appears throughout Elrios outside of Glave's control. The El Search Party asked Glave if the gates were of his doing, but even Glave seemed surprised by the recent development. Seeking to find the root of the phenomenon, Glave send the El Search Party into the Twisted Time and Space where they find themselves in the Henir corrupted remnants of Fahrmann's Peak.

"Well, do you need anything?"

"I am rather bored when I am left alone... So it is a special service."

"...Challenge with all your might. Until you make a complete mess... Tittertitter."