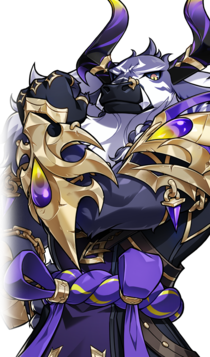 A soldier of the White-Ghost Army under Berthe. Despite his allegiance, he among others only begrudgingly serve under Berthe and disapprove of much of his policies, only aligning themselves out of fear.

Baryon was one among many Garen citizens of the White-Ghost Army who were forcibly conscripted into its military division when Berthe took control. Baryon and his subordinates were set off by Berthe on expeditions to locate the soul fragments of the previous White-Ghost King. Though their efforts proved generally fruitless, after Berthe had successfully recruited Haivan to their cause, the young Nous engineer created a device which allowed them to hone onto the location of the soul fragments.

Baryon and his subordinates were sent off to a long since abandoned White-Ghost village perched atop unstable grounds. They successfully secured the soul fragment located in the Sanctuary of the Soul and stood guard as they awaited the arrival of superior officers to take the fragment.

The El Search Party arrived as the sanctuary and launched their attack, capturing all the White-Ghost troops in the area, including Baryon. As the El Search Party rounded up the troops to take them back to Aurora, Baryon spoke up behalf of his subordinates, curious of the lack of interrogation of torture. Baryon expressed willingness to provide them information, though the group are skeptical. After being fooled with false information, Baryon expresses he has only been told so much and reveals to them the state of the White-Ghost Army and Berthe's current state of conscripting any able bodied Garen for an imminent attack on Elrios.

Baryon expresses that he and his men don't want to be part of this fight and simply want to live peacefully, stating that they simply wish to run away from Berthe. After some deliberation, Nichel accepts the group's surrender and agrees to hold them in Aurora.

Upon arriving to Aurora, Baryon round a communication device and was called out by Asella. He explains to her he'd simply picked it just now, she becomes suspicious of him believing the device broken. After Eve inspected the objected and figured out it was simply turned off, Baryon growls at the base leader. Upon hearing the message on the device stating the soul fragments were being tracks, Baryon enters a panic, now believing that Aurora wouldn't be a safe haven for himself.

The El Search Party were pushed into a corner and decided they had no other option than to storm the capital directly. Baryon then asks Add if was good with machinery. Baryon reveals to them that there is an abandoned train station nearby which leads directly to the capital, he and his troops had been using the train and the station as shelter for a time. The El Search Party take his lead and the soldier urges them to leave hastily to hopefully have anymore suspicious drawn to Aurora's location.