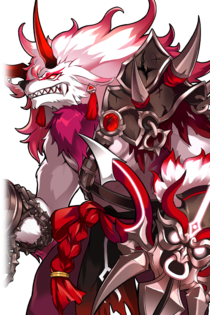 A demon and former member of the White-Ghost Army. She now pledges her allegiance to Nenya and acts as his Head Jailer.

Peace Between Humans and Demons

Deborah alongside the likes of Calonne were both previously members of the White-Ghost Army under the command of the Demon King Aegirp. Deborah was one among many foot-soldiers sent into Elrios in their quest to establish peaceful relations and trade with the humans in Elrios. During this time they all assumed human disguises and began to develop trade between realms.

However when civil unrest overtook the Demon Realm's ruling system, Aegirp was killed by her own general, Berthe, now working alongside the upcoming Demon Army. The demons in Elrios were none the wiser of the events transpiring in their homeland and soon all communication between the two ceased. After a blank period with not word from their leader, the group began to lose direction and eventually disbanded entirely, with each member parting ways.

After the demons had invaded Northern Empire, Deborah who had lost her way for some time came into contact with one of the demons, Nenya. The demon gave her a purpose in his quest to conquer and rule over Northern Empire. Deborah agreed to help the demon's ambitions and in the process as a sign of initiation, Nenya injected her with some of his power so he's have control over her if need be. Aiding the demon and his newfound army, they managed to secretly overthrow the Lord or a territory in North Fluone and took over the land by posing an a benevolent private army. Deborah became on of Nenya's highest ranking officers and acted as his Head Jailer.

When Mao and Laby managed to free Calonne, they triggered an alarm which summoned Deborah to confront them. She laughs at the idea of Calonne playing house with a human child, saying that he had fallen. Calonne strikes back criticizing his former ally for betraying their master and pledging her allegiance to somebody like Nenya. She vents her frustrations about their former master and how he vanished, now believing their goal to have been foolish. Calonne expresses his discontent with Deborah's choices, saying he can no longer sympathize with her decision. Deborah, frustrated vows to end all of their lives but is defeated at the hands of Laby. Now in no position to fight, Calonne takes the opportunity to speak with his former ally. Deborah rejects his pity, envying his position as Aegirp's top engineer while she was a mere nameless soldier. Calonne however shows to her that Aegirp believed their goal was of the most importance and his choice to soldiers would've mattered just as much. She still finds their goal to be one that is unattainable but Calonne shows Mao to be proof enough that their dream is not just a fairy tale. Deborah playfully laughs off Calonne as he goes away but reflects on it.

Once the situation begins to get hectic within the keep, Nenya uses his powers to take direct control over all the soldiers. Deborah having taking in his power also succumbed to becoming to mindless slave to Nenya's will. On the ascent to Nenya's chamber, the mind controlled Deborah once again faced off against Laby, Mao, and Calonne. Calonne initially lashed out at the soldier as if she had learned nothing from their talk, but Mao realizes she isn't acting in control. After they managed to defeat her, she regained some of her consciousness and reveal to them that she and the other soldiers were under Nenya's control. Revealing that they were desperate for purpose after they lost contact with their lord. She tells them that they must kill Nenya to free them all.

After Nenya was defeated and the situation deescalated, Deborah appeared to have been gotten under control along with the other demons previously under Nenya's rule.

Between the time when the El Search Party went to Pruinaum and their confrontation in the White-Ghost Castle, Calonne requested use of the portal and went back to North Fluone to recruit Deborah for aid. She came and when she arrived in Elrianode, she demanded to be sent back to her homeland to help immediately. The moment Calonne opened a portal to Pruinaum, Debroah leaped in without hesitation and coincidently, the portal landed right in the heart of the White-Ghost Castle while the El Search Party were confronting her former subordinate Hadron. Deborah decides to face on her former ally and let the El Search Party press onward.

With the might of Aurora's forces, much of the White-Ghost Army under Berthe's command began to descent and flee. Under Asella's command, Deborah encourage more of the army's solders to run away. While this was happening, the White-Ghost Castle suddenly became enveloped with a barrier, locking her and Aurora forces out.

When the barrier subsided, she and the rest went to see what had happened, to their surprise, they were greeted by the return of their once lord, Aegirp, reborn in the body of Nichel. Deborah and Calonne regaled their lord with what had gone on during her absence.