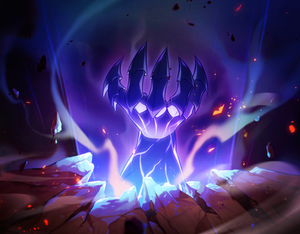 A legendary god of the demon world.

Resurrection of the Demon God

Scar attempted to summon the Demon God Sult but was foiled by the El Search Party and the El Lady. However the demon god would not go down without a fight, before being sealed away he was able to spread his dark influence across the land enraging monsters to a new level of power. This would be the basis for Heroic Mode.