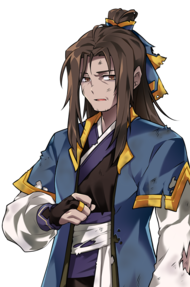 The leader of a region located in North Fluone. He was captured in imprisoned by Nenya in his ploy to rule over Northern Empire.

When the demons invaded and took control of the capital, Northern Empire collapsed and many refugees fled the to different territories. The Lord of the land welcomed the refugees in the hard times and made due in hit land to try and survive through the demon invasion.

After the demons layed siege to the land and claimed the Moon El for themselves, many of them left the land in route for their next target. One group of demons led by Nenya however stayed in the land. Nenya undercover managed to infiltrate the Lord's Keep and imprisoned the land's lord. He waited for the loss of the lord to cause the regions to descent into disorder before coming in himself disguised as a human. He convinced the people with his personal army and they willingly put the disguised demon as their lord. As this time the previous lord was imprisoned in the keep's prisons in the event the capital came in order for Nenya to keep his cover.

While in his cell, the former Lord noticed Laby and Mao, he call out for the girls. He reveals himself to the be the previous Lord of the land, he reveals that Nenya had captured and imprisoned him. Laby wonders why he hasn't fought back and the Lord says he hopes the Royal Army will come one day to help their situation. Mao unfortunately informs him the the Capital is still in a state of political chaos. The Lord laments the news and realizes that he may soon be of no use to Nenya and will soon be disposed of. He warns the two girls of the Head Jailer, Laby want to free the Lord but he refuses, saying he must stay alongside his fellow villagers. He regrets his situation but then the two girls are spotted by guards.

After they manged to free Calonne and defeat the Head Jailer Deborah, they begin to free all the prisoners being held, the Lord was surprised to see what the girls were capable of. The Lord was reinvigorated with a new sense of prupose and stood by his fellow villagers at they fought their way against the demons and out of the keep while Laby, Mao, and Calonne headed to face Nenya.

After the situation settled, the Lord was put back into a position of power to try and fix the region.