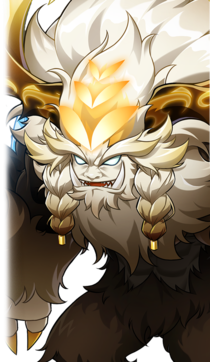 The alpha leader of the Yetis, a powerful fiend which the people stationed at Aurora steer clear of. Finding the location of Aegirp's Soul, Meson draws upon it for power.

Meson is the leader of the Quark race of Yeti that inhabit the frigid areas around Aurora, though the residents of Aurora noticed the leader's absence in recent times and believe he had been killed and another Quark taken his place. Though unannounced to them, Meson had found residence deep within the Old Village Site, where the fragment of Aegirp's soul was hidden. Making the area his territory, the essence of the soul fragment leaked and Meson absorbed it, become even more powerful.