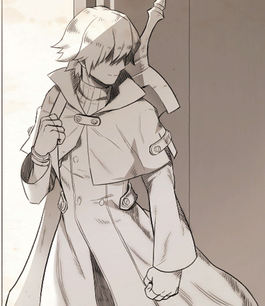 Father of Elsword and Elesis. He was the one who taught Elesis how to wield a sword and much like his daughter, was a Free Knight for the Velder Kingdom. One day he went off to his post in Velder while the sibling stayed in Ruben.

Leader of the at the time Red Mercenary Knights, Elkashu was enlisted by the Kingdom of Velder to aid protect the state during the Velder Civil War. When he was called to fight in the front lines he had to leave his home in Ruben along with leaving his children, Elsword and Elesis behind as he went off to war. He planned to leave at the break of dawn but both Elsword and Elesis had awoken. He promised the two that he would be back soon before he made his way off to Velder, Elsword too young to understand waved him away with a smile while Elesis felt a sense of sadness.

Several years later, the prolong time at war had done a number on Elkashu and he was in a less than pristine state of health. Having reached a bottleneck in the battle, his men's supplies are starting to wear thin and he cannot wait out the battle any longer. Seeking a means of aid, he contacted his daughter Elesis to join him on the battlefield. Looking over the current situation, Elkashu elaborates that the enemy general Sir Branderk is currently holding strong his fortress in the Glornir Plains, but due to the Dark Forest Marden between them and the plains, Branderk's general Corkus has been able to hold strong the only clear path between the two. After discussing the situation among the other commanders, he introduced Elesis. Elkashu knew that her experience with the El Search Party program and experience in demon infested dark forests would aid in their situation. Elesis chose to lead all the soldier with El Search Party experience through the Marden Forest to launch a surprise attack. Elkashu agreed with the plan to the other commanders' shock and dismay. He entrusted Elesis and partnered her with his vice captain Penensio.

While Elesis went through the Marden Forest fending off demons, her team made their way to the other side of Corkus's army and launched a successful sneak attack. With the enemy forces scrambled, Elkashu made his way to Corkus himself where he confronted the rebel general. He dueled Branderk who was on horseback, the battle dragged on but soon Elkashu's weakening body gave way. Corkus was just about to deliver the finishing blow on Elkashu before Elesis intervened and saved her father. Having saved her father, the two greeted the end of the battle in victory representing a major turning point in eliminating the rebel forces.