For one of the Mount of the same name, see Berthe (Mount). 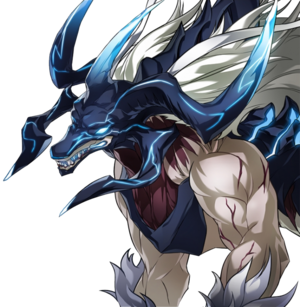 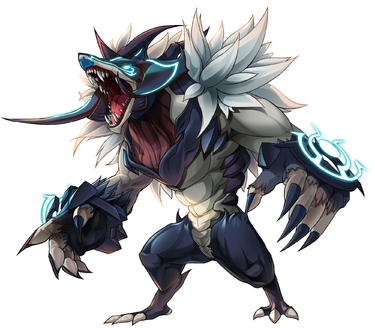 The fierce 1st Squad Commander of the White-Ghost Army who invaded Elrios through the portal in the Feita Shrine.

Berthe, with the help of the demon, Barkat, stage a coup against the White-Ghost King, Aegirp. They managed to kill the ruler, however she wasn't truly dead as she had split her soul into fragment in case such an event. Berthe assumes his role as the new leader of the White-Ghost Army under the allegiance of Barkat's Demon Army. The Demon Army planned an invasion of Elrios which Berthe participated in. However, he was unable to rally support of much of the existing White-Ghost Army, resulting in him enlisting the support of the Glitter race.

Berthe was first seen trying to steal the El Shard in Ruben. Two of Banthus's minions attempted to steal the El Shard away from him but failed miserably. Confronted by Elsword, the mighty ice demon thought not much of the boy, but when Elsword began to resonate with the El, the ice demon was caught surprised. Considering the situation, Berthe abandoned the El and retreated.

From then, Berthe made his way to Feita to corrupt the El fragments in the Feita Shrine into Dark El. Using the Dark El, he was able to open a giant portal to the Demon World. With the gate between the two worlds stable, Berthe, the 1st Squad Commander of the Glitter Army, advanced his troops through the portal and took over the Feita Shrine. The demons descended the tower and corrupted all the El, which allowed them to spawn more demons and transform the guardian plants into demonic monsters.

Chapter 8: Invaders from Another World

When the El Search Party arrived, Berthe was at the Shrine of Dedication Entrance scoffing at their attempts to stop them. He retreats to the main tower to further his plans as the Durahan Knight blocks the Search Party's path.

It wasn't until the El Search Party made their way up the Altar of Dedication did they confront Berthe for the final time. Berthe was defeated by the El Search Party, humiliated. Once Elsword spoke, the fallen demon realized that the child was the same boy who had the ability to resonate with the El. Berthe explains that the war had only begun before fleeing.

While Berthe's mission may have failed, his ability to open a large portal to the Demon World would pave the way for a more important attack on Velder.

Some time after his failure in Feita, Berthe managed to find one of Aegirp's Soul Fragments. The demon commander absorbed the soul fragment which granted him a large boost in power and altered his physical form. The demon commander at that point begins to plot another invasion of Elrios, aligning once again with the Red-Demon Army. In Pruinaum, he forcibly conscripted any able bodied Garen into the White-Ghost Army for the new invasion as well as to keep out the remaining souls. He had also made contact with Haivan who worked out a deal to get him to the portal technology sealed in Rigomor in exchange for Haivan to hold the position of the army's Chief Portal Technician.

Berthe alongside his army made their way to the undersea wastelands of Rigomor undetected. Just as the El Search Party averted the titan's core from imploding, Berthe breaks into the unsealed laboratory. Berthe obtained the Soul Fragment from Haivan, expressing their arrangements not going as planned but sufficing. He is surprised to see Elsword present, Elsword shocked to see the demon commander again. Haivan urges Berthe to uphold his end of the deal, which Berthe does, appointing the boy as the Chief Portal Engineer of the White-Ghost Army. Winster is appealed to see the demon who betrayed their lord and is equally appalled that he had coerced his son. Berthe scoffs at his former subordinate, denouncing the Nous as their inferiors. Elsword attempts to take on Berthe but is quickly thwarted due to Berthe's increased power and the boy being at his strength's limit. Berthe sees the opportunity to test his new power as the El Search Party prepare for a fight. The horns of Berthe's army ring in the distance, prompting the El Search Party to realize they'll soon be outnumbered. Nichel opposes Berthe as Winster suggests to Add to flee through the portal. The El Search Party are teleported away just as Berthe pushes through Nichel. With the group having fled, Berthe commands his army to take all the portal technology from the laboratory. To Haivan's surprise, Berthe also decided to take Winster with them. They head out to the demon capital with their hostages and technology.

At the capital, Haivan began research and invented a method to tracking down the remaining 3 soul fragments. Using this method, Haivan manages to uncover the location of a third soul fragment which the White-Ghost Army swiftly recover.

After Haivan obtained the final two soul fragments Berthe began the initial stage of his new invasion of Elrios. While the Red-Demon Army did not show, the demon commander was ready to begin the attack himself. Standing before the portal, Berthe awaited the intrusion of the El Search Party, prepared to defeat him and reclaim Aegirp's soul. He remarks amusement that Elsword seemed to always be there to foil his plans, but seeing them flee from his in Rigomor he believes now he can end this annoying cycle and succeed where he and the other demon commanders failed.

Berthe and the El Search Party clash, he proves himself to be much stronger than before, fusing with all of Aegirp soul, he obtains immense power, however his power high was quickly interrupted by another feeling. The conflict between his soul and Aegirp's came to a clash and the power which was rushing through him began to tear him apart. Barely managing to keep hold of himself as he collapses on himself, cursing his desire to tear apart the mortal world. Elsword asks why he desires to destroy Elrios so much, and Berthe replies that Elrios was only a stepping stone for his real goal, to siege the Heavens. Elsword was confused by his proclamation, but Berthe assured that Elsword's mere existence is proof that the Heavens exist. Before Berthe could continue on, the power within him peaks and the demon succumbs.

Berthe ceases to exist as the clashing souls manifest into a new entity, the Annihilator, a violent manifestation of Aegirp's will which sought to destroy the portal and everything surrounding it to ensure it would not fall into the wrong hands before being destroyed itself.