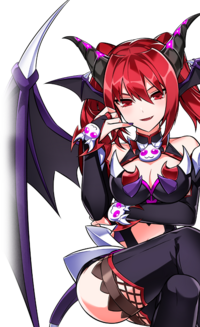 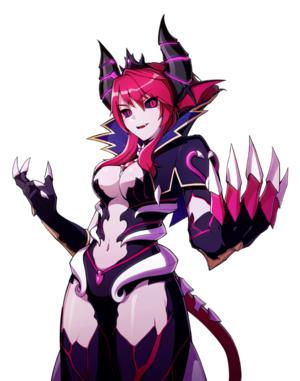 The 1st Squad Commander of the Red-Demon Army. The Demon commander in charge of causing the civil outbreak in Sander. A former associate of Luciela, she is a high ranking demon working alongside Ran.

Karis was once an acquaintance of Luciela in the Demon World. When Lu was able to escape to the material world in her child form, Karis was alerted of her escape and pursued soon after. A week after Lu's escape, Karis arrived in Lanox, backing Lu into a corner, she killed Ciel. However Lu contracted and fused with Ciel and attempted to flee from Karis through the Backalley of Lanox. There the newly contracted duo fought Karis, driving her away.

After that she went to Sander to prepare her plan. After the El Search Party defeated Ran, he made his way to Sander to inform Karis to begin her operation to take the Wind Priestess Anduran and reawaken the Old Holy Beast Behemoth.

In order to get her plan in motion, she slaughtered and stripped a Harpy of all her feathers. This act would cause the Harpy leader Kelaino to be on edge for humans, believing they had broke their peace treaty. She then met up with the Trocks in Trock's Lair, she promised the desert dwellers power and their home in Parugo Mountain back, giving Chieftain Trockta an amulet made from the Dark El, she controlled the Trocks to do her bidding. With the help of the Trocks she made her way to the Caluso Tribal Village where she began to corrupt the Wind El behind the villager's backs. With the Wind El turning dark, she used the growing darkness to reinforce Kelaino's distrust in humans and convince her to help her kidnap the Wind Priestess.

With Kelaino by her side, Karis ambushed the Anduran and her guards in Barren Sander. Kelaino swooped in and kidnapped the Wind Priestess then the two fled to Garpai Rock. Karis would not stay long as she and the Trocks took the Wind Priestess to Parugo Mountain in order to reawaken the Behemoth.

Having her minions and demon parasite scattered throughout the Behemoth's innards, Karis bought time for herself to merge with the beast. When the El Search Party reached the heart, Karis was waiting in her final form having merged with Behemoth, she was ready to control the Holy Beast herself and destroy Sander. The El Search Party fought this new powerful Karis and defeated her. With her dying breath, she uttered that things had only begun, that soon the Ancient God's creations will fall before the demons. Cursing the angels and the Ancient God.