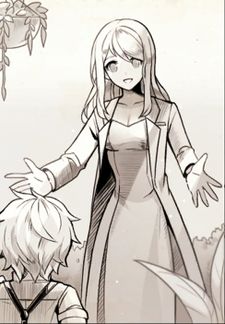 Add's caring mother, and a Nasod Researcher researching regenerative powers, plants and the environment. Her own laboratory has a greenhouse inside it, filled with flowers.

Grace used her knowledge of Nasods to research their application for biological and botanical experiments. She spent most her time working in her greenhouse which was filled with many flowers.

Whenever Edward felt sad, he sought refuge with Grace. After disappointing his father, Edward came to Grace's greenhouse where she comforted the boy. She showed him around her garden and even showed the boy an ancient flower she had been cultivating. She knows that her husband is strict but she urges that Edward stay strong.

After Grace learned about Asker's experiments on their child Edward, she soon confronted her husband. Deeply concerned about their child, she tried to face Asker, but Asker soon revealed his true intentions for the boy. She was appalled by her husband's actions but the two heard a noise outside, Grace went to check it out but Edward had quickly vacated the area.

Refusing to allow her son to become a weapon to Asker, she hunts down Asker's lab and tries her best to compromise his plans. Frantically trying to prevent her husband's plan, Grace is barely able to find a solution to get around Asker's set program. Instead of activating the battle codes implemented inside of Edward, she was able to divert the system to input a different name and bypass the original programming. She also aimed to prevent Asker from ever harming Edward ever again and reprogrammed the time machine to warp her son 300 years into the future.

Grace was killed alongside her husband when the Nasod Ruler raided their mansion.