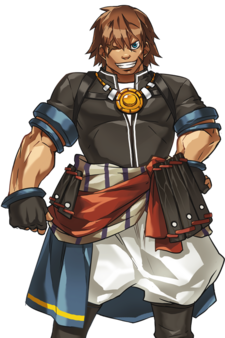 The leader of a notorious bandit group who stole the El Shard from Ruben Village.

Banthus used to be the El Search Captain before Lowe. After resigning, he became a notorious bandit in the rural areas of Lurensia. He had made a name for himself in both Ruben and Elder.

Working under the command of Wally, Banthus was hired to retrieve the El Shard from Ruben's Tree of El. Banthus sent his henchmen all around Ruben to prepare for his plans to steal the El. Barricades were set up and he closed in on the Tree of El. However, his plans would receive a bit of surprise when the demon Berthe also tried to steal the El. Some of Banthus's bandits would hunt down Berthe to try and retrieve his El while Banthus would storm the Tree of El when the El Search Party was distracted. While on his way, when Berthe abandoned the El Shard, Banthus stole that El and made his way to the Tree of El with Rena on hot pursuit. Elsword and Aisha would also join in the hunt.

Banthus successfully obtained the El for Wally and makes his escape from the Tree of El. As Banthus escapes from the scene, he makes his way towards White Mist Swamp, where he regroups with his bandit minions. By the time the El Search Party make their way to the White Mist Swamp, Banthus was already making his way out. With both the activity of the bandits and the El Search Party in the swamp, the Ancient Phoru was enraged and attacked the El Search Party. This made a perfect cover for Banthus to flee the scene and make his way to Elder to deliver the El.

Chapter 2: The Secret of Wally's Castle

In Elder, Banthus, handed to El to Wally and was given a Nasod weapon in the form of a necklace. He then went into hiding. The El Search Party under Hoffman's guidance, investigate the Shadow Forest and discover Banthus's hideout. They defeat and apprehend the bandits while discovering Banthus's necklace.