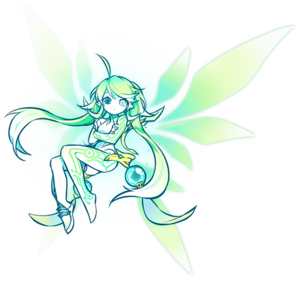 After the El exploded, the El Masters decided to pour their energy into the scattered El. In the process, they gave the power of attributes to the various scattered El. The masters fell into a deep slumber upon creating their respective El Shard, including her friend and contractor Ventus. However, Lincy did not enter a deep sleep like him, and aimed to look for a way to awaken him.

Lincy aimed to reawaken Ventus and sought a special stone in a cave she made together with him somewhere in Elrios. However, due to Ventus being asleep, her mana resources quickly fell short, and she fell unconscious in a cavern near Ruben during her search.

One day, over two years before the seal over Elrianode came undone, Rena was passing by the region when she noticed a couple of bandits investigating a light coming from the cave, believing the radiant light might be an El. After beating up the bandits, Rena investigated the light herself recognizing the aura as that of a spirit, however she worried as caves are not a suitable environment for spirits. Rena found the unconscious Lincy inside the cave.

Rena gave Lincy her mana which was able to reawaken the collapsed spirit. Lincy was shocked to see another elf, she then asks Rena is she would help her. Lincy explains that she is finding an elf same Soren who has been trapped in slumber after an accident, that she and Soren's powers were connected, that she would disappear if she could not save him. Lincy explains that she was searching the three tall hills in the region but collapsed after her search on the second mountain. Rena agreed to help out Lincy, but soon the two were confronted by the bandits which Rena fended off with her combat and archery skills.

After the two went to explore the caves but Rena began sidetracked multiple times, helping the local villagers, chasing the bandits once again, among other things. Lincy complains about their unfocused travels, Rena tells Lincy about how she wasn't able to save Lua and wants to help everybody around her, reminding Lincy of Soren. The two comfort each other before continuing their search. Lincy believes she finds the cave she was looking for but is surprised when she can find nothing of note, she swore that she and Soren had used the cave during the days of the Elrian Kingdom, which caught Rena by surprise since the Elrian Kingdom had fallen hundreds of years ago. Lincy soon realized that she had been unconscious for much longer than she had ever anticipated. Next thing the two knew, a loose boulder was collapsing on top of them which caused Rena to duck out over a cliff. Lincy pleaded Rena to use the spirits to help her but Rena refused, when the cliff crumbled and hurled Rena into the pit below, the spirits of the forest went in to help her. Rena wondered if Lincy called for them, but Lincy told Rena that they came to help her on their own.

After Rena was saved by the spirits, Lincy was super glad to see her okay. Rena observed the area and noticed a strange mark on a rock. Lincy became shocked to see that the cave had moved and tried to open it but she did not have enough mana. Rena called upon the spirits around her for power and projected a magical arrow, she fired a Rail Stinger at the cave entrance and it broke apart. Lincy was amazed to see Rena as someone who is so beloved by the spirits. The two went inside the cave and on a marked stone altar was a small diamond stone. Lincy resonated with the stone and the altar started to glow, she called for Soren. The marks on Lincy's body started to glow and she knew that he had finally waken up. Rena and Lincy walked outside and as a gift for helping her, Lincy gave Rena a new bow, one that she and Soren had made a long time ago. Lincy reminisces that she and Soren used to travel the world to protect Elrios much like Rena is now. The two promise to be friends and that they would one day meet again, then Lincy leaves to search for her friend.

Chapter 29: Invasion of the Order

After Ventus saves Rena from an exploding Spacio Reaper, the Wind Master introducing himself and Lincy. Rena immediately recognized Lincy, and Ventus soon realized that the woman he had saved was Rena, the same girl who helped Lincy reawaken him. Ventus expressed his joy of finally meeting her and starts to flirt with her to Lincy's dismay. After talking, Lincy and Ventus follow the El Search Party back to Elrianode to meet with Denif.

Aisha asks Ventus on why he was in the area, Ventus admits to having been awake for quite some time already, telling the group that it was due to Lincy and Rena's help. When Rena heard this she suddenly realized that the person Lincy was trying to save all those years ago was actually Master Ventus himself. He thanks Rena and Lincy gets a little jealous and starts hitting Ventus.

After the El Search Party defeated the Interdimensional Colossus, the monsters attacking the El Tower soon began to dissipate and things quieted down. He thanked the other Masters, Priestesses, and the El Lady for helping protect the El Tower. Ventus gives his thanks to all the Priestesses in his flirtatious way, which Denif quickly scolds him for, telling him to act more Master like again and Lincy starts attacking Ventus again out of jealousy.

The El Masters and El Priestesses talk about the journeys they have all faced thus far and the traditions of the El Order. Denif and Ventus then explain how the El Order began to train priestesses to work under the El Masters. Ventus commenting about one of Anduran's predecessors having a bit of a temper before Lincy strikes him, telling Ventus that he basically asked for it.

When Denif had tasked Ventus to go tot he Demon Realm to deliver a wind stone of the El Search Party and seek out the Fire Master Rosso, Lincy as his partner naturally went with him. When the two reach the other side and found themselves in the demon forest, she, with he ability to speak the ancient elven tongue aided Ventus in communicating with the dark elves. The two were taken to the Dark Elves' Outpost where she aided Ventus in speaking with the Dark Elf Elder Edith. They learned of the El Search Party's previous actions and that they had gone to the Spirit Asylum. She went with Ventus to the asylum where they learned of the tower which had just collapsed as they spoke with Nephilim Lord.

As the two advanced to reach the El Search Party, Lincy saw an elf in an apparently bad condition. Panicked at the possibility it may have been Rena and the rest of the El Search Party in grave danger, Lincy began to alarm Ventus and they increased their pace. Reaching the tower, she and Ventus found the El Search Party as well as the Fire Master Rosso. Ventus makes his delivery and takes the badly damaged El Master, Lincy returns to Elrianode alongside her partner.

After they had made their return, that night, Ventus and Lincy noticed Laby by herself. Ventus greets her and she begins to ask him about the wind. Ventus tries to explain that he and the wind are one, but are still separate entities, then using Lincy to explain how their relationship is similar, like partners. After Ventus suggests Laby train on it and she leaves, Lincy wonders why Ventus would help the girl despite he himself still being suspicious of her. Ventus replying that perhaps he wished to act like a proper old-timer and help his colleague's student.

During Ventus aid of Rose in trying to communicate with the Demon Realm, Lincy fused with the Wind Master in their ultimate test. Fortunately their fusion against Rose provided enough energy to let Zero receive some type of message which they managed to make out as "his is Au--ra. We've found the soul. Return immediately, Rigomor is safe. Do not reply. They may be monitoring us.".

Ventus and Lincy returned to Elrianode to check up on Rena, catching her by surprise. Lincy scolded Soren for catching her by surprise and quickly asks how Rena was feeling. She questioned her about what happened in the Demon Realm and continued to express worry. Rena tried to quell her worry but Lincy reveals that Elves are not by noting the Dark Elves, but Lincy notes that Elves such as herself have not been conditioned to survive the energy of the Demon Realm like Dark Elves and that they can be easily corrupted. She pleas that Rena reconsider returning to the Demon Realm. Ventus suggests they wager on her ability to contend with him in a spar. They sneak out to the Elriabrunnr to spar, Rena wonders what he will gain if he wins, and keeps his wager a secret. Ventus is curious by her conviction and Rena tells how she's experienced so much since leaving her home of Eldemyr and she really wants to be as much of a hero as she could, Lincy saying she is already the hero of the elves. Lincy asks if she is scared about what she is doing, and Rena admits she is but recalls her friends Lua which he had lost and how she used to loath herself for it, but at some point decided she had to make the most of the life she still has. Seeing Rena's determination, Lincy agrees to let her go but she wasn't going to go easy on her. Rena wins their bet and Ventus tells her about the Elf they sensed in the Demon Realm. Rena was intirgued but also realized she had been played and the outcome would've been the same regardless if she had won or lost.