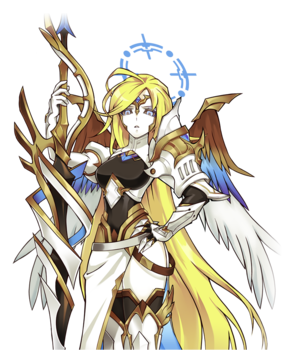 Durenda, who happens to be the Hernacyds' officer in command, will be of great help to the El Search Party as they make their way to Adrian's Palace. Go find her when you're ready to upgrade your Elysion guard equipment.

The El Search Party having successfully disguised themselves as Atlas reinforcements, made their way into the city of Elysion. Discussing with Bernard about the strange events occurring around the city. Concerned about the abduction of Nasod Scouts, Bernard told the El Search Party to talk with the Hernacyd officer in command, Durenda. Aisha asked if the lady was Durenda, which she firmly and rudely replied, Aisha says her tone reminded her of someone, Ara noted that it might be herself that she is reminded of. Add questioned if she knew of the situation, Durenda quickly replied that she was well aware and ended the conversation there. Elsword and Chung explained their situation and that Bernard had sent them over. Durenda soon realized that they were the "Atlas Army" that was sent up and showed some disgust towards them. She explains that she had sent out the scouts in order to try and resolve the problem with the palace guards in the Celestial Crossraods without stirring up trouble. The El Search Party told her about that her scouts had been captured by the guards. She says that this has been the case ever since they had lost communication with Adrian's Palace. She says that even at her rank, the commands from the palace are absolute and she cannot do anything about it. Unable to do anything further, she takes her leave to rest her sword, Lord Phobos.

When she had gotten word that the El Search Party were able to get inside Adrian's Palace, she immediately made her way to find the group. She asked for the situation inside the palace, Elsword told her that the number of Nasods made it difficult for them to progress any further. She shows appreciation for their powers, seeing them as more than mere Atlas troops, she then tells them that someone is definitely putting out orders to attack them, she suspects is is Herbaon, unable to give any commands to the Nasods inside the palace, she points them towards Hugo who she believes can hack and help them bypass the guards.

Having failed their first attempt to raid Solace's Fortress, the group head for Durenda's help. Durenda is seen communicating with Lord Phobos to Aisha and Ara's confusion. She reveals to the group that her sword has a voice and is Lord Phobos, who told her that she should aid them. The group were able to get past the outer area and Durenda planned to push forward to the interior, she warns the group to not let their guard down, now entering enemy territory.

In one of Hugo and Theodore's attempted experiments, Durenda noticed their actions and watches over them. Hugo insists that she help them out. Theodore siting that they were inspired by Solace's Diceon machine, and that he was helping Hugo's development. Durenda firmly states that she does much care for the two's work but warns them that she doesn't want to see any more explosions from the two. Hugo promises that his latest version will not cause another explosion. After adjusting a few things, the devices reacted and exploded. Hugo was in a state of confusion on what had gone wrong. Durenda recovering from the explosion lashes out at the two and swears to report the two to Adrian directly.

Durenda was sent by Adrian to be Add's sparring partner when studying Add's combat data. She criticized Add's prowess as a warrior, though he boy was quick to correct her that he was a scientist, wishing to continue with little effort. Durenda was greatly displeased by his displayed complacency and began to go at him with all her power. The boy was surprise by the lunacy at display, with little choice but to give it his all, he combat Durenda at her own game. This provided Adrian with all the data he was looking looking for.