Language:
Chieftain of the Trocks 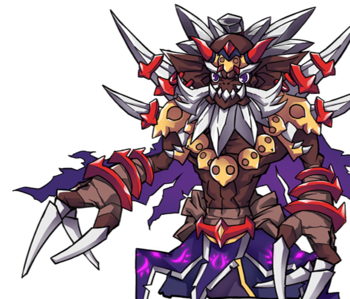 Leader of the Trocks, Karis came to Trockta with promises of giving them power and taking their homeland of Parugo Mountain back. Trockta agreed to Karis's promise and she gave him an amulet. Unknowingly the Dark El amulet allowed Karis to take control of Trockta.

Trockta under the control of Karis commander the Trocks to do Karis's bidding. After the El Search Party was able to break Trockta free of his mind control, he told the group about Karis's ploy to take Anduran to Parugo Mountain and awaken the Behemoth. That she had given him an amulet containing the Dark El which she used to mind control him and the other Trocks. With this new information Vapor went post haste to warn the Caluso Tribe that had control over Parugo Mountain.