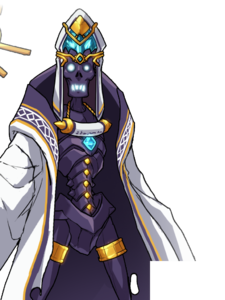 The Water Priest, when the demon attacked he swore to protect the Water Seal at all cost. Corrupted by the demon influence his soul was trapped in the abyss.

As the previous Lord of Hamel aged, he deemed his son untrustworthy and instead entrusted the Water Seal to the Water Priest Avalanche. When the demons invaded Hamel, they attacked the Temple of Water. In order to protect the Water Seal, Avalanche kept the Water Seal inside his staff and removed his memories. The demons were able to transform Avalanche into a zombie that controlled the spirits around the Water Temple.

Upon being defeated by the El Search Party, Avalanche was able to regain control briefly. With the remainder of his life, he reveals that he had been protecting the Water Seal, even as a zombie. He tells the El Search Party not to trust Rod Ross before being struck down by Ran, ending his life.