Information: This page features an Epic NPC, they are not playable nor can they be unlocked. More info can be found here.
Language:
Ancient Nasod Princess 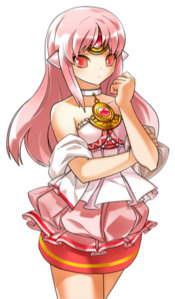 Apple is the Ancient Nasod Princess that has been asleep for centuries but was awakened by King Nasod. Apple is very gentle and intelligent. She was quietly hiding at Altera Core until it was time to come out. However, the Ancient Nasod Code: Q-PROTO_00 was not able to rest due to the El's explosion. Now, Code: Q-PROTO_00 is aware of Apple's existence and is headed to Altera Core. Apple intends to use all of the power remaining from the El and use it against Code: Q-PROTO_00 to modify and control her code. Apple seeks to gain more of the Elstone's power but realizes that Colonel Edan, the Bloody Officer, holds the power of El. She now hopes to use the modified Q-PROTO_00 to attack him. 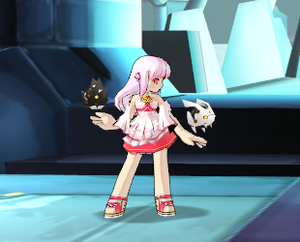 Apple has access to all of Code Empress's combos, including the old combo ZZZvZZ, which was deleted in 05/29/2014 KR patch.

Apple poses little threat. While she has increased attack speed, she has difficulty catching players that alternate between platforms. She also likes to spam Energy Contract for no reason. She doesn't have a Roar either. Catch her with ranged attacks and punish her. When paired with another Epic NPC however, be wary of being "sniped" by Heaven's Fist, as although it is nerfed, it can and will finish you off if you are low on HP. For this reason, kills are much more guaranteed if you go after her rather than be sniped by her while mid-killing the other NPC.