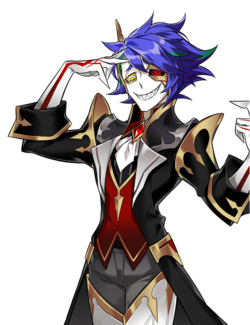 Chief of the Diceon Research Lab in Diceon Mines. Dekal was ordered by Solace to descend down to Atlas to pretend to research the Diceon ores but all he was doing was sending secret supplies of high-quality Diceon to Solace.

Dekal was originally born in Elysion and because of this, even after he has been in Atlas for so long, he prefers to keep his in an Elysion build type.

Dekal was created in Elysion. Some time after Solace arrived to Elysion, Dekal began to work under the El Master to create a powerful Diceon device. Under Solace's orders and with his help, Dekal descended down to Atlas, where he took on the role as the Chief of the Diceon Research Lab in the Diceon Mines. However, in reality he was rerouting high quality Diceon Stones using the official transport tubes and hid them inside statues in Atlas City to be transported to Solace in Elysion. He provided Atlas City's computers with false reports and covered up his tracks to prevent the systems from catching on to the Diceon Stones he took out of the system.

Chapter 21: The Other Dimensional World

When the El Search Party were helping Yuno investigate why Diceon Stones were turning up missing, they made their way to see Diceon Mines' director. There they encountered Science Dekal and caught him contacting Solace. There, they fought Dekal before he fled the scene. The El Search Party looked through his research notes and discovered how he was able to steal the Diceon right out of the mines. Unfortunately for the El Search Party, with Dekal having fled the area and heading back to Elysion, his tracks began to surface in Atlas City and security feed from Dekal's Research Lab in the Diceon Mines pinned the Search Party as the Diceon Cube thieves.

While inside Solace's Fortress, Dekal laughs as the El Search Party as they traverse the enormous labyrinth that he and Solace have created. Saying that they could not understand the world that he has created.