Language:
The Knight of Feita, Blacksmith 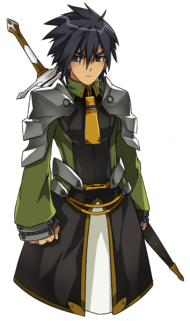 A knight designated to the Feita Region, Lento used to be a field general of the Suburbs of Feita. He has been sent to guard Allegro, who was assigned some tasks to perform in Feita. Like most other soldiers, he is tough and rarely shows emotion, but he does his best to accomplish his duties. He is trying his hardest to keep Allegro safe.

Chapter 8: Invaders from Another World

After Lento and the other Feita Knights were able to flee the Feita Shrine, they have set up camp in the surrounding area and are able to keep the Demons from escaping for the time being. They attempted to seek reinforcements from Velder but were met with silence. When the El Search Party arrives, he tells them the status update, showing them how far they've managed to push back but mentioned they're being held up by the rumored Dullahan Knight. They managed to break through and Lento orders his men to block the entrance as the rest rendezvous back at camp.

The El Search Party depart into the chapel while Lento mans his men at base. When they return, they have a Dark El in their possession. Lento them orders his men to scout the Chapel in search of any rouge Dark El that may impede their progress. Eventually he manages to make safe passage to the top of the tower where they see the portal created by the demons. Lento proclaims this to be the final battle ahead and prepares his troops.

After Berthe was defeated and the remaining demon troops were disposed, the portal was sealed and all the Feita Knights breathed a sigh of relief. In the time after, Lento takes the time to confront Raven specifically. The soldier expresses his admiration for Raven's father, and says he doesn't believe the allegations that were once thrown his way.

Sometime later, they finally hear from Velder, but are met with grave news that the city had too become under siege by demons. Lento laments they don't have enough men to finish what needs to be done in Feita and send off to Velder, but decides to do what he could.

After the demon invasion of Feita was over, the Feita Knights were able to secure the entire area. After doing so, a restoration project began in Feita. The group planned to completely restore the Underground Chapel and Altar to their original pristine condition. After much time had passed, Allegro commented on how peaceful Feita has been as of late ever since the El Search party had defeated the demons. Lento is quick to tell Allegro that they shouldn't let their guard down just in case. Allegro looks ahead to the reconstruction project and sees the long road they have in front of them. Lento says that he has to get some work done. Before leaving off, he asks Allegro why he speaks so timidly. Allegro replies that some things are just hard to change.