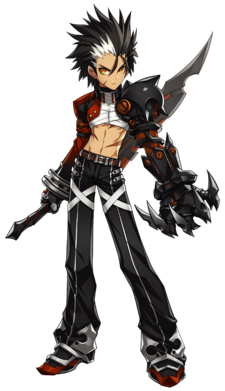 [A mercenary that uses the enhanced powers of the Nasod]

A warrior that crushes his enemies with his Nasod Hand.

Raven realizes that with each successful battle, the Nasod arm was upgrading by itself.

He worries about using his hand but decides that he would rather accept the Nasod part and use it's power than play it safe.

Raven, who noticed an abnormality in his body during an ongoing battle, realized that the more he used the Nasod Hand, the more powerful the Nasod hand was becoming by evolving itself and getting stronger. Raven contemplated about using the Nasod hand, wondering if he will return to how he used to be before, under the power of the Nasods. He must not turn away from the sins he has committed with this arm. Rather than avoiding and choosing safety, Raven decided that right atonement was to accept the Nasod, to control it's power and use it, so he uses the Nasod Arm to the limit and chooses a fighting method that uses uses it's explosive power.

will change your job to Over Taker.

Upon reaching Lv. 35, a Over Taker can job advance to a Reckless Fist.